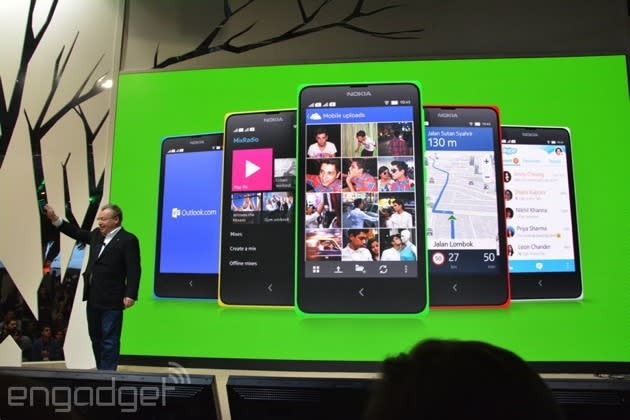 Nokia is officially launching its very first Android devices, known as the X and the X+, on stage at its annual Mobile World Congress press conference. We were all taken aback by the second (and third) device (since only one leaked), so it's incredible to see Nokia make such a huge foray into enemy territory. The X will have a 4-inch, 840 x 480 IPS screen, 512MB RAM, 4GB of storage expandable storage via microSD slot and 3-megapixel camera, while the X+ sports the same specs but more RAM (768 MB) and an included 4GB microSD card. You won't be getting Google's apps or Play store, however as both handsets will be based on the forked AOSP Android OS. Nokia says that'll have the advantages of the Android ecosystem, but with a "differentiated experience." So far, Here Maps, MixRadio, Skype and Outlook are being featured on the Nokia Store. You can access the Nokia and third party stores using the devices, but not Google Play, obviously. We've heard SwiftKey will be available on the Nokia X range (and for free, too), as will BBM, which is also coming to Windows Phone sometime "this summer."

The new devices are featuring a ported version of FastLane for Asha devices as a sort of skin, to give a similar experience as its other budget handsets. When you swipe across it, it'll bring up a sort of notification bar showing recently used apps, missed calls and texts and other activities. During the demo, Elop showed both the Nokia Store and Yandex, where he pulled down Aero Express, a Russian-flavored app. The X will be available immediately in growth markets (ie, not the US) and run 89 euros. The X+, meanwhile, will run 99 euros but won't arrive until sometime in Q2 this year.

In this article: Android, bbm, BlackberryMessenger, mobilepostcross, MWC2014, nokia, Nokia X, Nokia X+, swiftkey, X, X+
All products recommended by Engadget are selected by our editorial team, independent of our parent company. Some of our stories include affiliate links. If you buy something through one of these links, we may earn an affiliate commission.