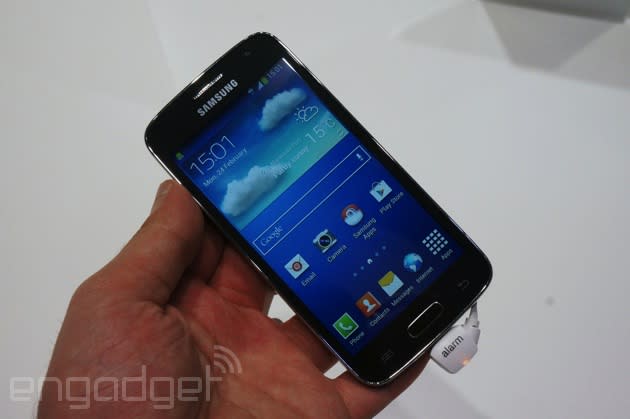 When you have the inventory that Samsung does, you don't need to make a fuss when you launch a mid-range Android phone. But the Korean firm did recently release one -- the Galaxy Core LTE -- and it's certainly worth a moment of your time if you're in that market. Design-wise you know the drill: take one of Samsung's flagships and nip a bit here, maybe a tuck there. Aesthetically it's derivative, sure, but comfortable -- like some well worn-in shoes. On a positive note, the back panel is textured, and feels like something between rubber and a soft touch finish. This at least stops it feeling too much like one of Samsung's many "sausage machine" handsets.

As for specifications, it's fairly typical of the current mid-tier breed. That means a 4.5-inch qHD display, a 1.2 GHz dual-core chip (based on Arm's A9, but no mention of specifics), a 5-megapixel/VGA camera combo, 8GB of storage (plus a microSD slot) and a 2,100 mAh battery. We only got to spend a short while with it, but if we're honest, we were actually impressed by how quick and fluid menu navigation was, or how responsive Google maps rendering was. This, of course, should be no real test of a modern phone, but it still gave us a little "not bad" reflective moment. At the moment we only know it's coming to Europe and Asia, with no mention on price. But if we're betting on anything, it's that it'll have a new cousin to look up to too -- in just a few short hours. 11
In this article: core, galaxy core, hands on, hands-on, mobilepostcross, mwc2014, samsung
All products recommended by Engadget are selected by our editorial team, independent of our parent company. Some of our stories include affiliate links. If you buy something through one of these links, we may earn an affiliate commission.