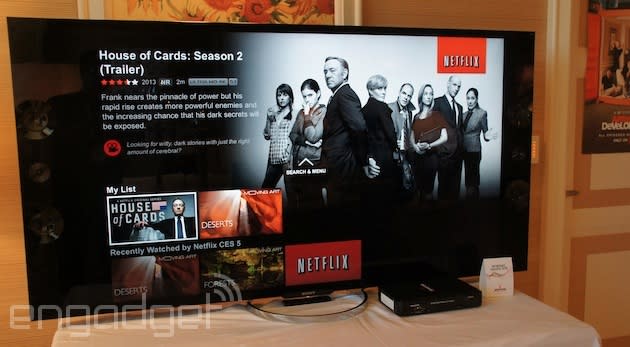 Many suspect that Netflix's bandwidth deal with Comcast won't be an isolated event, and it turns out that those suspicions are well-founded. Verizon chief Lowell McAdam tells CNBC that he expects a Comcast-like internet peering agreement at some stage, and that the telecom has been talking to Netflix for roughly a year about just such a thing. You have to spend a lot of money to keep the internet "vibrant," the CEO claims. The statements aren't going to assuage critics who believe that ISPs like Verizon are creating the problems by refusing to upgrade, but they do suggest that Netflix may have to keep spending cash to get the quality of service that it wants.

Update: AT&T tells us that it's also negotiating a "more direct connection" with Netflix.

In this article: hdpostcross, internet, netflix, netneutrality, peering, streaming, verizon
All products recommended by Engadget are selected by our editorial team, independent of our parent company. Some of our stories include affiliate links. If you buy something through one of these links, we may earn an affiliate commission.