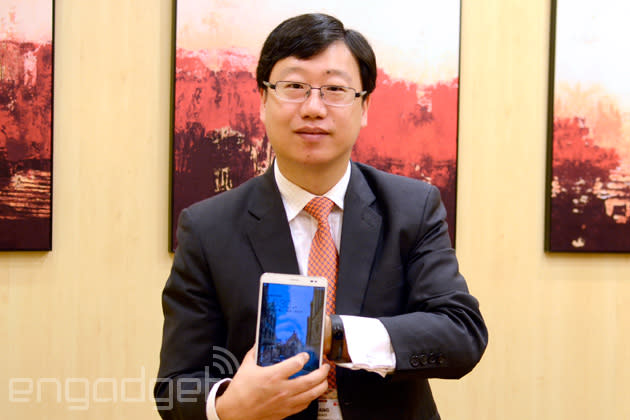 Huawei's recently announced MediaPad X1 has caused quite a stir -- it's the lightest and smallest-ever 7-inch tablet (let alone a phablet), while also packing decent features like a 1,920 x 1,200 display, 5,000mAh battery and 150 Mbps LTE. The retail price quoted at the launch event was €399 or about $550 for the LTE model, but back in China, it appears that Huawei's slapped an insane discount on the same quad-core tablet, albeit under a slightly different name. Dubbed the Honor X1, the 3G model will retail for just CN¥1,799 or about $290, and the 4G version will go for just CN¥1,999 or $330. That's a $220 drop for the LTE model! So when we caught up with Huawei Device's CMO Shao Yang at MWC, we had to ask him: What was he thinking? Well, it's all about the way consumers perceive this device in different regions.

The exec explained that his company conducted different tests in four countries: China, Germany, Saudi Arabia and Russia. For the China tests, many people identified the X1 as a phone, which isn't surprising given the increasing popularity of phablets in Asia. Folks from other countries, however, saw the X1 as a tablet that can be used as a phone.

"As Honor is our online brand, we're saving channel costs and can therefore offer a further deal."

"Under these circumstances, we priced the device according to the way it's perceived in each region," said Yang. "In Europe, the iPad mini with LTE costs about €499 to €599, so our partners are still extremely happy with our €399 price point over there. In China, it's a special case: the X1 is sold under the Honor brand. As Honor is our online brand, we're saving channel costs and can therefore offer a further deal."

Of course, it's no coincidence that the Honor X1 is priced the same as the Xiaomi Phone 3 -- which doesn't even have LTE, nor storage expansion -- and other flagship phones from similar Chinese online brands. It's apparent that Huawei's willing to drastically squeeze its margins just to starve its local online competitors, in order to hold or even leap from its number four position in China. But at the same time, you have to also admire Huawei for innovating in the wearable space to reach this goal, and Yang told us to stay tuned for more later this year.

In this article: android, china, hisilicon, honor, honorx1, huawei, interview, mediapadx1, mobilepostcross, mwc, mwc2014, phablet, phone, shaoyang, tablet, x1
All products recommended by Engadget are selected by our editorial team, independent of our parent company. Some of our stories include affiliate links. If you buy something through one of these links, we may earn an affiliate commission.