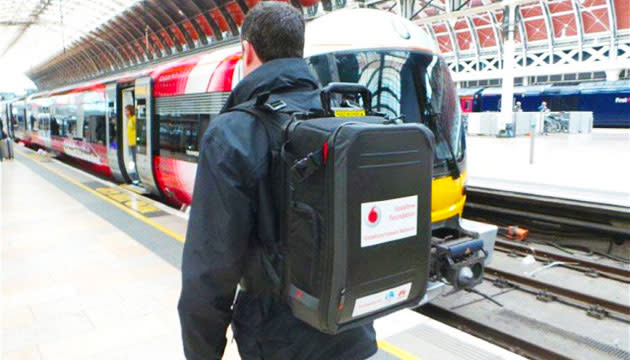 Vodafone Foundation (the carrier's philantrophic arm) has launched a 24-pound mobile network in a backpack to help folks contact family and friends in the wake of a disaster. The device called the Instant Network Mini may be relatively small, but it provides a 2G GSM connection capable of handling thousands of text messages and five calls made at once to people within a 328-foot radius. It's equipped with a GSM base transceiver that uses satellite connection to link up to a host network.

Vodafone developed the Mini as a smaller version of its 220-pound "portable" network with help from its Spanish division, Huawei and non-government org Télécoms Sans Frontières. The Foundation's been lugging the much bigger device to relief operations in the name of its Instant Network Programme. In fact, during Vodafone's mission to the Philippines following Typhoon Haiyan, two 220-pound kits handled a total of 1.4 million text messages and 443,288 calls within 29 days. Obviously, the larger machine has a wider operating radius (3 miles), but the Mini has its own set of pros. Since it can be deployed within minutes and be carried on planes, it can potentially help more people -- and more quickly, too.

In this article: culture, disaster, DisasterRelief, gadgetry, gadgets, gear, instantnetworkmini, internet, philanthropy, services, TL17HLP, vodafone, vodafonefoundation
All products recommended by Engadget are selected by our editorial team, independent of our parent company. Some of our stories include affiliate links. If you buy something through one of these links, we may earn an affiliate commission.