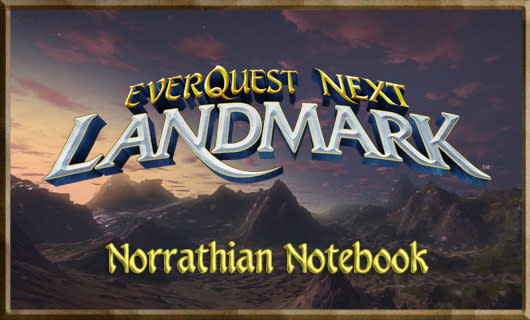 Thanks to the early launch of EverQuest Next Landmark's alpha, players have been deep in the world of voxel-mining, crafting, and building to their hearts' content. Armed with with that hands-on knowledge, players are able to offer insights and suggestions about the development of that game. But that doesn't mean that those who aren't physically in the alpha (and have access to post in those forums) don't have valuable opinions about the direction of both Landmark and EverQuest Next, and the devs want to hear from everyone! That's where the EQN Round Tables come in. And the Norrathian Notebook Round Table roundups are here to help you keep track of them all.

The three previous round ups corralled 23 questions, dev opinions, and video responses. This fourth edition (not to be dismissed like certain other fourth editions) contains eight more. Do you care about specialty servers, in-game weather, or crafting? Are you burning with a desire to tell the devs exactly how you feel about other players affecting your gameplay? Then there are polls and discussions that you'll want to take part in if you haven't already. One round table even focuses on improving the new player experience. And we've got them all rounded up right here for you. 24. What type of specialty server would you be most likely to play on, or what type do you play on in other games?

It's fitting that we're leading off this roundup with the question that governs your gaming experience: Which, if any, specialty servers would you like to see in the games? There's certainly something to be said for having everyone together, but there are also advantages to having servers earmarked for specific playstyles. What's your preference?Although the "no specialty servers response" is running a close second, more respondents expressed a preference for a roleplaying server. Few answered in the affirmative for permadeath or special rule sets (9% and 8%, respectively), but one-quarter of those polled would select a PvP server.

The devs: Director of Development Dave Georgeson mirrors the majority of voters, stating, "I admit to liking RP servers. Seems to attract friendlier people for some reason. I have fun there." Senior Producer Terry Michaels is on the opposite side of the spectrum, siding with the least popular vote: "I am drawn to Special Rule Sets. Unique situations with great challenges are cool.
25. In Landmark, what kind of building do you think you'll participate in?

This next question is definitely very centered on one of the two games, and it's not EQN. If all things are ideal (especially finding all the perfect resources!), would you be more opt to go off and build by yourself, or is the creation process something you'd undergo with friends and guildmates?Variety is the spice of Landmark! Most folks -- almost half -- stated that they would participate in a mixture of solo and group building projects. That's pretty good for a game that devs hope will be a social experience. The next highest vote went to solo, which pulled in an even 25%.

The devs: Lead Game Designer Darrin McPherson fits right in with the crowd, stating, "I will participate in all to some degree but lean toward small group." Senior Art Director Rosie Rappaport expressed her preference for social building as well, saying, "Building with friends is always funnest for me!"
26. In Landmark, to what degree should you be able to negatively affect other players' gameplay?

Now here's a touchy subject: You're trotting along, gaming it up, when another player crosses your path -- should said stranger in that chance encounter have the ability to really affect your gameplay? And what about all your friends you deal with on a more regular basis? The options delve a lot deeper than just yes or no here.Those who answer a resounding NO! outnumber those in any other category; however, if you add the final two selections together (setting aside any concerns about those who swoon for the whole death and destruction bit), those who want the ability to affect anyone's gameplay anytime win with half the vote. In fact, those who want some form of this ability make up for all but 32% of respondents.

The devs: Creative Director Jeff Butler actually admits that some of his personal leanings are suppressed for the good of the whole: "My inner griefer will hate me for this, but never."
Technical Director Steve Klug takes a moderate approach, saying, "Limited to those that haven't opted in. But I'd like to see at least temporary negative effects for those that have." And McPherson's reply is just too good not to include: "Only ever consensually. Opt-in mayhem would be fun." [italics added]
27. In EverQuest Next, should one character be able to learn all types of crafting?
Lest you think EQ Next was lost in all the talk about Landmark, this next question is strictly about that future sandbox. It boils down to whether or not players want to a single character to learn all there is to know about crafting. This may seem like a no-brainer to some, but remember that the devs want to encourage the social aspect (the actually MM in MMO) of the game as well. Where does your opinion fall? Players have overwhelmingly voted in support of learning all crafting professions on one character. As of this writing, a combined 68% picked the first two selections, whereas only 28% want to choose specialized crafting classes. Personally, I'd like the option of learning them all one by one, but I'd rather have my individual alts (sounds promising that we get some, no?) have separate crafting specializations for immersion purposes.

The devs: Rappaport chimed in with her thoughts, saying, "Socialization should be highly encouraged and rewarded, but not required." Klug followed these same sentiments: "Dependency between players is good, but soloing should be possible if you put in the time. I say learn all classes!"

28. Would you like there to be an impact from weather/seasons in Landmark?

Since I've asked this very question in various formats like The Stream Team, you can tell it's one that truly interests me personally. And while having a dynamic system that changes visually is pretty much enjoyed by everyone across the board, how do folks feel about weather that can have serious gameplay effects?There's absolutely no question here about the minds of the players: Give weather meaning! No other round table poll has seen such solidarity among the players. A whopping 91% want weather to have a meaningful impact on the game. (Except in the case of a player named Weather, as noted in round table #24!)

The devs: Butler made his thoughts known with the statement, "I love weather effects, adding seasonal changes would be awesome!" Rappaport, while agreeing with that sentiment, also included a little extra food for thought. "This would be way cool and dynamic and fun. I'd also like events tied to weather changes," she opined.
These final three round tables, and presumably all future ones, sport a new format; instead of various devs voicing their opinions about the topic at hand, one dev does a miniblog explaining the question more in-depth and why it's being asked. 29. What sort of build out contests would you prefer after the initial Landmark contest?
With no NDA on the alpha, players have been free to share their creations on all forms of media, from Twitter to forums to livestreams. That's given those who are waiting for the beta or release plenty of chances to get a taste of what's possible. And there's no denying that some of these creations are simply astounding! That brings us to the building contests that devs have talked about since way back when. What exactly do players want to see be born from voxels in these competitions?Perhaps influenced by the dev announcement at SOE Live that contest winners could see their creations put into EQN, the vast majority of players want to feast their eyes upon architecture specifically for that new Norrath. The second place choice of genre-specific fantasy pulled in only 19% of the votes, less than one-third of the winner's total.

Georgeson's remarks: Kicking off the new format, Georgeson asked simply, "Where do we go from here?" One idea is building contests, which are a handy way to emphasize the features that are already in game (versus those features that are still MIA).
30. What do you think would most improve a new user's experience?

There's just no getting around it: A player's first experience in a game can be a make-or-break situation. So how do devs, who've been immersed in the game so long that they couldn't pretend to be a new user if they tried, get a feel for that all-important newbie experience? Why, you ask all the recent newbies, of course!The top two requests for a better start coming right out of the gates were more customization options for characters (38%) and clear goals for those beginning minutes (28%). Personally, while having a nice brief get-your-feet-wet tutorial could certainly be beneficial, I'd hate to lose some of that learn-by-exploration philosophy that makes sandboxes special.

McPherson's remarks: The lead game designer laid it on the line; devs are so immersed in the game (and have been for quite some time) that they simply can't experience things as a new user would. For this reason, player input is especially ideal.
31. What tools do you feel are most in need of some more usability iteration? (Not bug fixes)
The latest round table made an appearance just a couple of days ago, focusing on which building tool needed more attention first. Players have expressed a deep desire for more precise tools, but which tool has priority in the public's mind?Of all the polls, this one seems pretty even in responses: The top three range from 24% to 29% of the vote. Currently, the line tool is the one players want adjusted the most, with the smooth tool and shaped block neck and neck not far behind.


Building and UI Lead Jake Sones' says the devs understand that the building tools are integral to Landmark, and he explained that there are indeed solutions in the works for certain issues. In fact, there's a "tweak mode" in development to ensure that voxels can be manipulated in the same manner as props, meaning that things can be adjusted after placement.

The EverQuest realm is so big that sometimes MJ Guthrie gets lost in it all! Join her as she explores the franchise's nooks and crannies from the Overrealm to Timorous Deep. Running every Saturday, the Norrathian Notebook is your resource for all things EverQuest Next and EverQuest II -- and catch MJ every 'EverQuest Two-sday' on Massively TV!
In this article: Darrin-McPherson, Dave-Georgeson, eq, eq-2, eq-ii, eq-next, eq-next-landmark, eq2, eqii, eqn, eqn-landmark, eqnext, eqnl, everquest, everquest-2, everquest-ii, everquest-next, everquest-next-landmark, f2p, fantasy, featured, free-to-play, Jeff-Butler, landmark, norrath, norrathian-notebook, opinion, Rosie-Rappaport, round-table-response, round-table-round-up, round-table-roundup, round-up, roundup, sandbox, soe, sony, sony-online-entertainment, steve-klug, tattered-notebook, Terry-Michaels, the-tattered-notebook
All products recommended by Engadget are selected by our editorial team, independent of our parent company. Some of our stories include affiliate links. If you buy something through one of these links, we may earn an affiliate commission.