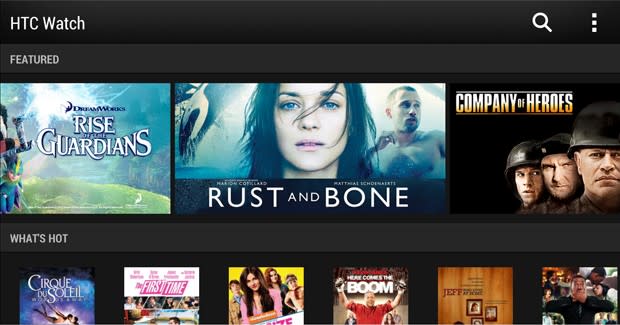 When HTC pulled the plug on its Watch service in a number of European countries last year, it told us that it was merely streamlining its efforts, and that movie rentals and purchases would continue to be offered in places with the "highest engagement." But now it looks like the closures are spreading to those areas too, with UK users receiving an email warning them that the Watch store will close on March 31st, by which point any purchased movies must be downloaded to a device in order to remain accessible. We've asked HTC for a fuller explanation, but in the meantime we're left with the feeling that the company's in-house streaming platform may actually have been dying a slow death this whole time, due to a lack of popularity. Either that, or the name "HTC Watch" has suddenly become very inconvenient.

Update: HTC has issued a statement confirming the shutdown.

"From 31st March 2014, HTC can confirm that it will no longer support the HTC Watch video-on-demand service. We would like to apologise for any inconvenience caused to HTC Watch subscribers and would encourage any customers affected by the change to contact their local HTC support centre. Our focus continues to be on offering the best possible mobile experience to customers everywhere and our strength lies in empowering people to discover and access the right content for them from the wealth of services out there."

In this article: hdpostcross, htc, htcwatch, mobilepostcross, movie, movies, streaming, uk, watch
All products recommended by Engadget are selected by our editorial team, independent of our parent company. Some of our stories include affiliate links. If you buy something through one of these links, we may earn an affiliate commission.