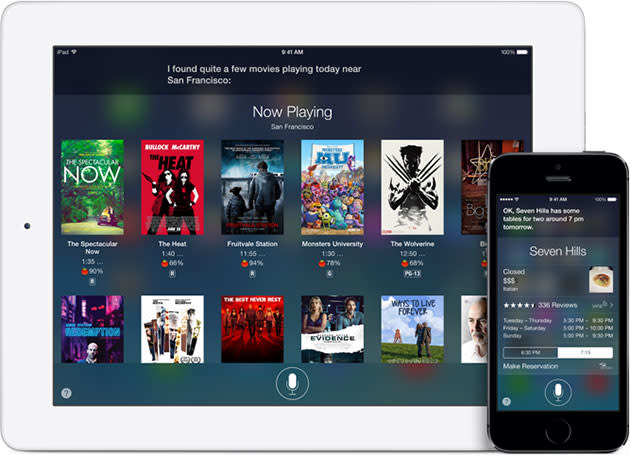 Right now you can ask Siri to nab you some movie tickets or reserve a table at your favorite restaurant, but there's still plenty she (or he) can't handle. According to a report from The Information though, the folks in Cupertino are working to make Siri smarter by giving it the ability to search and point to third-party apps.

Pumping up Siri's search smarts means that the virtual assistant will reportedly be able to recognize what your apps do and point you to them when you ask for something related. Imagine asking Siri to check for nearby cabs or track your run -- it could soon route you to apps like Hailo or RunKeeper. Apple has forged relationships with companies like OpenTable, Fandango and Wolfram Research to flesh out Siri's feature list in the past. Those agreements resulted in some neat app integrations, but this new approach could ultimately mean similar functionality for all apps, not just the ones Apple inks deals with. The Information adds that Siri may soon be able to decide what apps should be displayed when there's not enough screen real estate for all of them. Sounds like a crucial feature for something like the fabled Apple smartwatch, doesn't it?

In this article: apple, apps, developers, iOS, iphone, iWatch, siri, SmartWatch
All products recommended by Engadget are selected by our editorial team, independent of our parent company. Some of our stories include affiliate links. If you buy something through one of these links, we may earn an affiliate commission.