Next for Qualcomm: faster WiFi and a gateway to cheap tablets 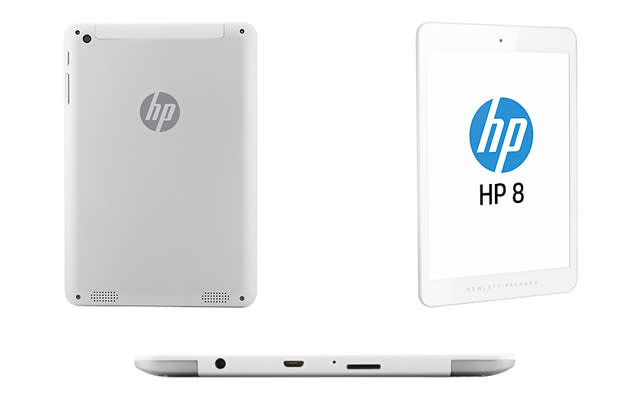 Hewlett Packard is trying to pull off a flanking maneuver on the Android market, through low-profile launches of low-cost devices. We recently came across the company's VoiceTab phablets during a side-show at Mobile World Congress, and now we're looking at a more traditional 7.85-inch tablet called the HP 8. In return for $170, you'll get a plain-looking device that, aesthetically, has more in common with last year's Slate 7 than with the faux-metal VoiceTabs. However, since we're making comparisons, we should also point out that the HP 8 has a worse display than both the Slate 7 and Dell's rival Venue 8, with fewer pixels (1,024 x 768) spread out over a larger area. The software and internals seem functional enough, though: Android 4.2.2 running on a quad-core ARM chip made by the Chinese company Allwinner, with 1GB of RAM, 16GB of expandable storage, stereo speakers, and a just-about-okay 3,800mAh battery that promises up to seven hours of use.

In this article: allwinner, android, budget, hp, hp8, mobilepostcross, tablet
All products recommended by Engadget are selected by our editorial team, independent of our parent company. Some of our stories include affiliate links. If you buy something through one of these links, we may earn an affiliate commission.