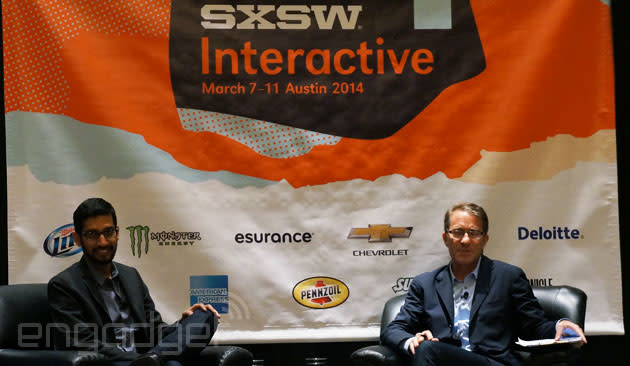 We've got very few details at the moment, but Sundar Pichai is preparing to lead the Android charge into the wearable space. He announced that the company will launch a new wearable SDK for Android at SXSW Interactive. The tools will be available to download in roughly two weeks time and will expand the efforts to put Google's mobile OS on smart watches or fitness bands. Pichai definitely didn't limit Android to those two particular implementations, however. He focused heavily on expanding developers' ability to harvest data from sensors of any kind... so long as they're mounted on your body. He even suggested a future where your jacket is loaded with sensors and powered by Android.

He also promised when the SDK is available that the company will offer its "vision" of how it sees the market developing. Pichai said it will be quite sometime before Google announces any specific products, however. There will be an extensive period of collecting developer feedback from the SDK before moving forward with other plans

Obviously Google is trying to get Android into as many devices as possible. Moving into the wearable space only makes sense. It has made various efforts on TV front and at CES announced a partnership with a number of car manufacturers to get the little green bot inside your dashboard as well. Hopefully we'll get see the rumored fruits of LG and Google's efforts before the end of the year, and learn whether or not Mountain View got its money's worth when it purchased WIMM Labs.

In this article: android, google, mobilepostcross, sdk, Sundar Pichai, sxsw2014
All products recommended by Engadget are selected by our editorial team, independent of our parent company. Some of our stories include affiliate links. If you buy something through one of these links, we may earn an affiliate commission.