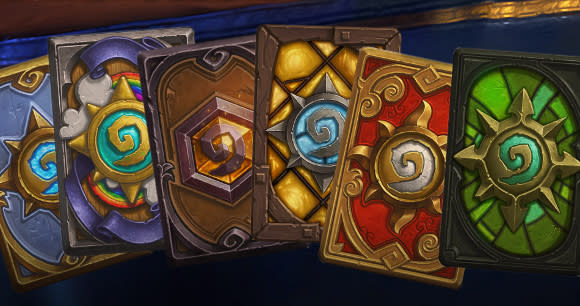 Update: Hearthstone has been released. Like, for real. Official, no-longer-beta release. That wasn't very exciting, was it?

Yesterday, Hearthstone community manager Aratil revealed a few changes to the game in advance of its official launch. To start, Tinkmaster Overspark and Nat Pagle are being rebalanced. That's one small part of today's Hearthstone patch, which includes the Hearthsteed mount for Hearthstone-playing World of Warcraft players.If you never used Tinkmaster Overspark, the change can be a little confusing -- it almost looks like nothing changed at all. Originally, you were able to choose which target is transformed, but not whether it transforms into a Devilsaur or a Squirrel. Now you can neither choose its target nor what the target becomes. It's entirely random after this change. Nat Pagle's change means he is required to stay on the field for at least one round before he begins drawing cards for you, giving your opponent an opportunity to kill him off before you get anything at all.

This is all part of the latest patch to Hearthstone, which also includes matchmaking changes, golden heroes, alternate card backs, and more. You can find the patch notes on the Hearthstone blog and the official explanation for some of these changes below.

Upcoming Balance and Ranked Play Updates
Thank you for playing, testing and offering your feedback on Hearthstone as we've transitioned from closed beta to open beta. The release of Hearthstone is on the horizon, and we have a couple of additional changes to certain cards we feel it is necessary to implement before the game goes live. As we've stated, we plan to make very few card changes when the game goes live, and we will only make changes to cards if they are absolutely necessary. Making these changes now will ensure a more balanced state of the overall game into release.

We will be making changes to the following cards: Tinkmaster Overspark and Nat Pagle.

Tinkmaster Overspark is now a 3/3 (up from 2/2) and now reads: Battlecry: Transform another random minion into a 5/5 Devilsaur or a 1/1 Squirrel.Nat Pagle now reads: At the start of your turn, you have a 50% chance to draw an extra card.In addition to these balance changes, we have been monitoring your feedback on our Ranked Play system that we implemented with Closed Beta Patch 1.0.0.4217. Many players have felt that the start of each Ranked Play season was particularly difficult due to the fact that rankings are reset for all players, regardless of how far they progressed in rankings during that season.

After the next patch, you will receive bonus stars at the start of each season based on your performance from the previous season. This way, players that have progressed far into any given Ranked Play season will not be challenging those potentially new to the game or jumping into Ranked Play for the first time.

For example, if you attained Legend, Innkeeper (Rank 1), or Black Knight (Rank 2) rank in any given season, at the start of next season you will start off at Questing Adventurer (Rank 16) rather than Angry Chicken (Rank 25).

Expert cards that are being changed can be disenchanted for their full cost for a limited time when the patch goes live. We hope these changes will increase the variety of cards you will see at all levels of play, and make playing Hearthstone a more fun and interactive game for everyone.

We'll see you in game!

source
In this article: golden-heroes, hearthsteed, hearthstone, nat-pagle, patch-notes, tinkmaster-overspark
All products recommended by Engadget are selected by our editorial team, independent of our parent company. Some of our stories include affiliate links. If you buy something through one of these links, we may earn an affiliate commission.