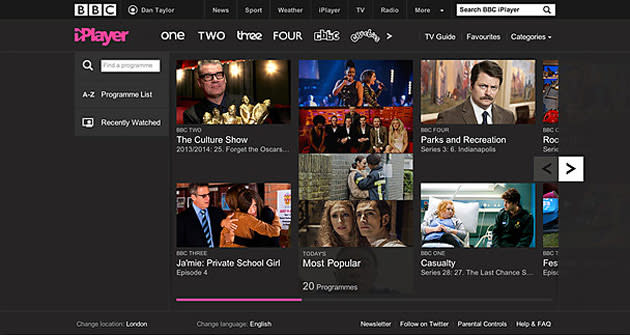 The BBC teased us with stories of a new, improved iPlayer nearing the end of the last year, and today we're seeing the first part of that go live. Arriving today on the web and smart TVs, the "completely re-built" iPlayer has a simpler, image-focused UI that'll be consistent across all platforms when tablet and smartphone apps catch up in a few months. The desktop client is not set to change, if you were wondering, as it's primarily a download manager these days.

You can switch between the various BBC channels using tabs near the top of the page, with quick access to categories and favorites on the same level. A revised category list should make it easier to find things to watch that suits your tastes, and suggestive search should help you find those shows you already know you like. Similarly, new themed "collections" will give offer eyeball food that revolves around the same topic. If you're still not sure what to watch, there's always the A-Z program and recently watched lists for inspiration. A new playback page doesn't need to reload when you move onto the next episode (or something else from the recommendations), and you can add programs to favorites straight from the player.

The new iPlayer isn't just about improving the user experience, though. It's a completely fresh platform the BBC will build on top of in the future. We didn't hear much about features we might have expected today, like the BBC Store for paid content, and an extension of the catch-up window to 30 days (which may be realized later in the year if the BBC Trust approves). We did learn, however, that logging-in is going to become more important, so you can pause a show on one device and pick up where you left off on another, for example -- and that it won't be a requirement or an attempt to track down those in the licence grey area.

It's not so much about adding more bells and whistles, though, but about "creative opportunities that the new iPlayer will open up." The high likelihood of BBC Three moving online-only was heralded as both sad and exciting by the BBC, as moving to a different setup means they can experiment with new content and how it's presented to viewers. BBC Three has been a guinea pig for 'iPlayer-first' content, of course, and should it move exclusively online, will retain its own identity, we're told. Also, there will be much more unique content coming to iPlayer in general during the year -- a handful of drama shorts have found a spot in the new UI today -- as the BBC continues to develop iPlayer as a fully featured digital offering to complement their traditional channels, rather than a fall-back.

In this article: bbc, bbciplayer, bbcstore, bbcthree, discovery, hdpostcross, iplayer, recommendations, uk
All products recommended by Engadget are selected by our editorial team, independent of our parent company. Some of our stories include affiliate links. If you buy something through one of these links, we may earn an affiliate commission.