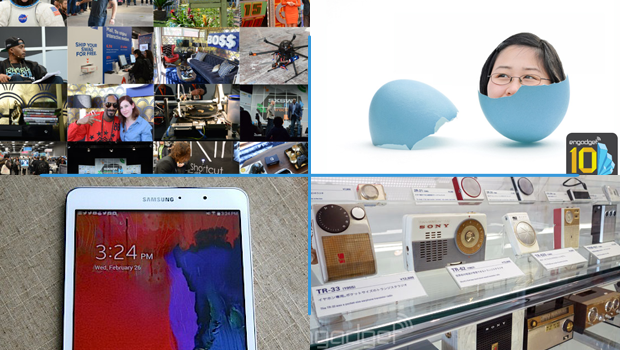 Touring the Sony Archives in Tokyo

From robot dogs, to Walkman Cassette players, to, yes, a golden guinea pig, Sony's Archive building outlines 60 years of the company's history. Read on as Engadget's Mat Smith travels to Tokyo and visits some of Sony's most fundamental products during a tour of the facility. Life in 140 characters or less: My first eight years on Twitter

Back in 2006, Engadget's Nicole Lee wasn't sure "tweeting" would ever catch on. The social network's early days were simple, full of seemingly boring conversations and awkward third-person updates. Much to her surprise, the charm of Twitter prevailed the test of time. Samsung's new Galaxy Tab Pro 8.4 stands just a little taller that its predecessor, the Galaxy Tab 3, packing a full HD display. And while the Tab Pro 8.4 does have a sleek, premium feel, its seven hour battery life leaves us wanting. But if you're not worried about power, this $400 tablet is a worthy alternative to the iPad mini. SXSW 2014 was full of awesome gear like IBM's Watson-powered food truck and Chaotic Moon's stun copter, but today we're saying farewell. It's not too late to catch up on the action, though. Check out some of our favorite highlight photos from the event right here.

In this article: android, apple, chaotic moon, galaxy tab pro 8.4, ibm, ibm watson, nicolelee, sony, sony archives, stun copter, sxsw, tab pro, tab pro 8.4, tdr, tinder, twitter, watson
All products recommended by Engadget are selected by our editorial team, independent of our parent company. Some of our stories include affiliate links. If you buy something through one of these links, we may earn an affiliate commission.