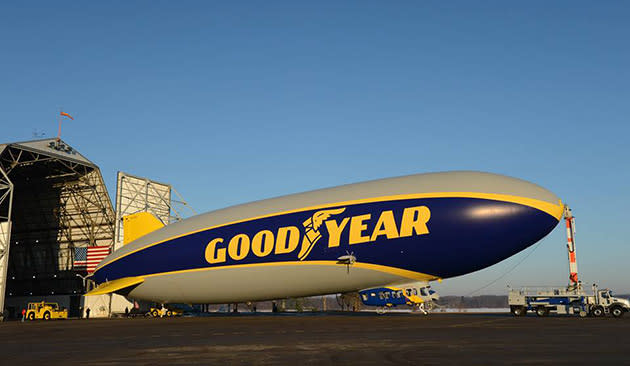 For 45 years, Goodyear has been using the same ole model for its Blimp fleet, famous for flashing ads in the skies and taking aerial shots of big events. Now, the tire company has finally launched the first dirigible in its next-generation fleet, and it's not even a blimp anymore -- it's a zeppelin. Considering blimp technology's remained largely the same all this time (imagine, the last time Goodyear bothered with a new design was when Apollo 11 landed on the moon), the switch is certainly understandable. This model (called Zeppelin NT) is capable of vertical take off and landing, and is larger and faster than the company's current airships, thanks to its three movable engines. Unlike traditional zeppelins with rigid structures, though, it's more of a zeppelin-blimp hybrid, as it relies both on internal pressure and a frame to maintain its shape.

The new aircraft, which set the company back $20 million, is 52 feet longer and 20mph faster (at 246 feet long with a max speed of 73mph) than Goodyear's current ones. It's the first of three zeppelins the company plans to build, and it's slated to begin its test flights sometime this month from Wingfoot Lake Hangar in Ohio. Wondering how it feels to fly on a dirigible? We hope you're good at naming things, then, because Goodyear's taking suggestions for the airship's name. The winner will get exclusive use of the zeppelin -- and its bathroom with a window! -- for a day.

In this article: airship, blimp, dirigible, Goodyear, zeppelin
All products recommended by Engadget are selected by our editorial team, independent of our parent company. Some of our stories include affiliate links. If you buy something through one of these links, we may earn an affiliate commission.