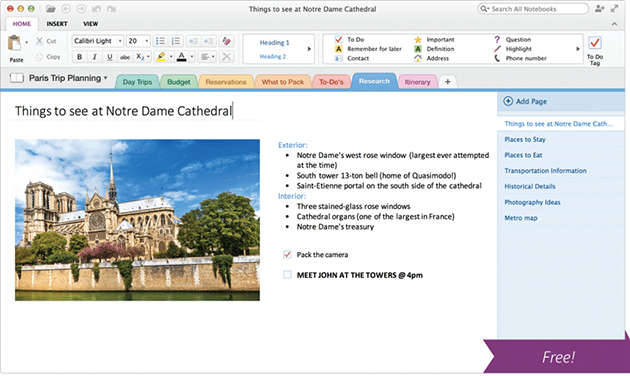 Honestly, we're a little surprised that it took this long for OneNote to land on OS X -- Microsoft's powerful tool for taking and organizing notes has been around for a decade now. Oddly it came to iOS and Android before finally finding a home in the Mac version of the Office suite of products. With its launch on Apple desktops, OneNote is also going completely gratis. The new Mac version is available for free in the App Store and the Windows edition is becoming a free download as well. The Metro-fied version designed for Windows 8 has been free for sometime now, but the full desktop version of OneNote 2013 was a paid part of the Office productivity suite. Premium features, like SharePoint support and Outlook integration still require you to cough up some cash, however.

In addition to ditching the price tag, Microsoft is adding a bunch of new features to OneNote. Most notably is the launch of an API that allows developers to integrate their own creations with the service. As a demonstration of its most basic functionality, Redmond launched a collection of web clipper extensions for IE, Chrome, Firefox and Safari. Of course, capturing web pages is just the tip of the iceberg. Feedly, IFTTT, Genius Scan and a host of others have added the ability to save to OneNote from their own apps and we're sure plenty more will join the fray soon.

Lastly, today also marks the launch of Office Lens, a Windows Phone app that turns your smartphone camera into a scanner. Evernote and Google Drive (previously Google Docs) have offered the ability to snap photos of documents or handwritten missives for a while now. Lens finally brings OCR (optical character recognition) to Microsoft's apps, bringing it closer to complete feature parity with its competitors. You can go download OneNote and its various companion apps now.

In this article: API, apple, mac, microsoft, office lens, onenote, OneNote Clipper, os x, web clipper
All products recommended by Engadget are selected by our editorial team, independent of our parent company. Some of our stories include affiliate links. If you buy something through one of these links, we may earn an affiliate commission.