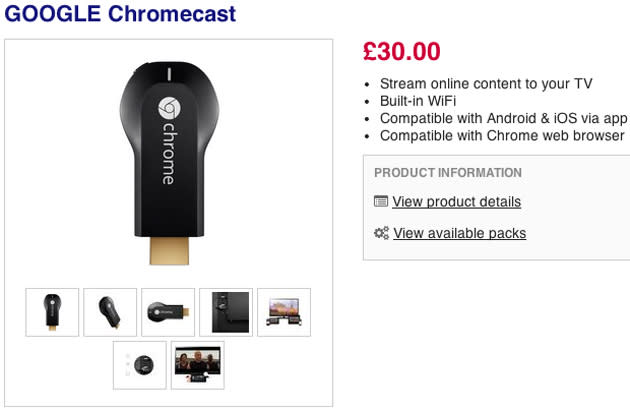 Google's Sundar Pichai said that Chromecast would be available in many more countries this month, and it now appears that this worldwide launch could be close at hand. Engadget reader Martin has noticed that big UK retail chain Currys is already listing the TV media stick, with nary an official announcement in sight. The company says it's out of stock, but there's a plausible £30 ($50) price tag in place. While the entry doesn't give any clues as to when the Chromecast would reach the country, Google has less than two weeks to make good on its word -- we'd reckon that the device arrives sooner rather than later.

In this article: android, chromecast, currys, google, hdpostcross, peripherals, television, tv, uk
All products recommended by Engadget are selected by our editorial team, independent of our parent company. Some of our stories include affiliate links. If you buy something through one of these links, we may earn an affiliate commission.