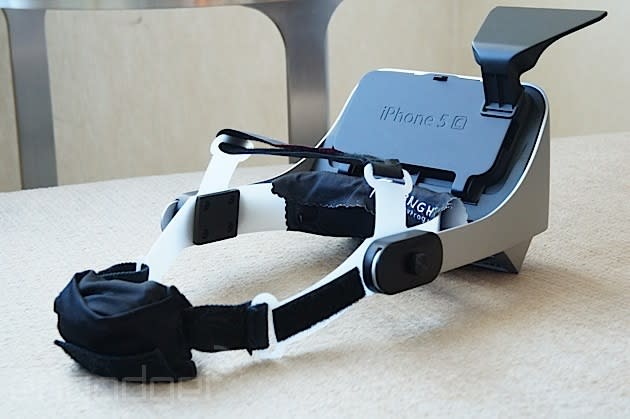 The verdict on virtual reality seems to be in: the future of the technology is in fully immersive, face bound ski-goggles that block out your physical perceptions in favor of digitally created wonderlands. Well, unless you're looking at Seebright's AR/VR head-mounted display prototype. The company brought an early version of its developing headgear to GDC and it's.. well, very different. Unlike the hardware we've seen from Sony, Oculus and GameFace, Seebright's headgear leaves the user's peripheral wide-open by suspending a smartphone above their field of view and reflecting it in front of them with a low-hanging mirror. To be honest, it's a little bizarre.

As a standard virtual reality headset, Seebright's HMD prototype is uncomfortable -- it's hard to feel immersed in a virtual world if your perception of reality remains intact. The mirror reflecting the headgear's host-smartphone's display only fills out center of the user's view, giving the their peripheral vision every opportunity to break their suspension of disbelief. We found this to be extremely distracting in gaming experiences: the dark asteroid fields of Starfighter 12 (an on-rails shooter demo) felt out of place floating in Seebright's well-lit hotel suite. Company CEO John Murray told us that the prototype also had a partially transparent half-mirror, designed to convert the headgear into an augmented reality display. This idea has more promise, but unfortunately, the transparent screen wasn't available for testing just yet. It's just as well: the HMD prototype was particularly top heavy and fairly uncomfortable. A external battery pack lives on the back strap, acting as a counterbalance, but it isn't enough. Compared to lighter and more comfortable feeling (and fully-integrated) VR headsets, Seebright's prototype is just awkward.

That said, the company is aiming for a different demographic. The company told us it hopes to give the final device a price that will make it an "impulse purchase," something you can give as a gift without breaking the bank. It also says there are plenty of revisions on the way, which will hopefully iron out some of the comfort and balance issues. Got a strong neck? Stay tuned: the company says it will be launching a Kickstarter campaign next month.

In this article: AR, augmentedreality, gdc, gdc14, gdc2014, hands-on, Seebright, virtualreality, VR
All products recommended by Engadget are selected by our editorial team, independent of our parent company. Some of our stories include affiliate links. If you buy something through one of these links, we may earn an affiliate commission.