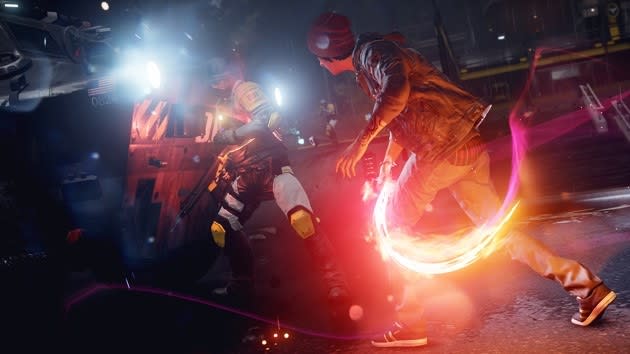 Welcome ladygeeks and gentlenerds to the new era of gaming. The one where you get to watch, and comment, as other people livestream gameplay from next-gen consoles. Since our live gameplay of Titanfall for Xbox One went over so well, we've decided to make this a regular feature for any major, new release, quirky indie, or, really, any game we deem worthy enough. Because games! They're fun!

Are you a good guy or are you a bad guy? It's a morality tale as old as time itself -- or, maybe it's just as old as the first inFamous on PlayStation 3 back in 2009. Cole, the protagonist of the series' previous two titles, may be dead (we think?), but his legacy lives on in Delsin, the new superhero/villain (it's your choice, really) at the heart of Sucker Punch's inFamous Second Son. The game, set for release tomorrow, is Sony's first in-house AAA exclusive for the PlayStation 4. And lucky you, we're here to play it live so you can virtually try before you buy. It's all happening just after the break.

Update: It's over now, but thanks for playing!

Watch live video from josephvolpe on www.twitch.tv
In this article: hdpostcross, infamous, infamous second son, infamoussecondson, playdate, PlayStation, playstation4, ps4, sony, suckerpunch
All products recommended by Engadget are selected by our editorial team, independent of our parent company. Some of our stories include affiliate links. If you buy something through one of these links, we may earn an affiliate commission.