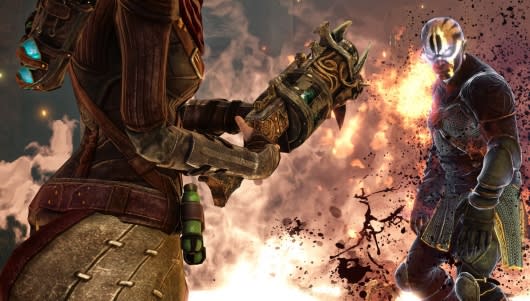 Let me begin with a somewhat tortured analogy: Nosgoth is sort of like discovering an obscure bit of British nobility of dubious importance. Those intimately familiar with the relevant lineage will be somewhat perplexed by this stranger, who is not really at all what they expected. Everyone else will just see someone showing up in a crowded field without a whole lot to say.

In a way, that would almost be easier, since then you could just write it off altogether. It's just not terribly unique.

Nosgoth is the sequel to the long-running Legacy of Kain series, which eventually moved over into the Soul Reaver series and kind of petered out in 2004 or so. A lot of people really enjoyed it, and there have been rumors about another sequel coming out pretty much forever. Instead of being an in-depth RPG, however, Nosgoth is a class-based asymmetrical shooter. So it's not really as much a sequel as it is a thorough pillaging of an existing IP layered onto another sort of game altogether. By itself, this isn't a bad thing. The idea of taking an existing franchise and delivering a new game that's in a very different style is kind of nifty; it gives players the opportunity to explore the world from a different angle and all that fun stuff. The problem, of course, is that fans of the franchise have been waiting for a sequel for half of forever, and this is the closest the franchise has gotten. And it is not only a different game but an entirely different one, which has to rankle a bit.

It's also unfortunate because it removes the truly unique parts of the franchise in favor of a setup that has gotten extremely tiresome. You have two groups, humans and vampires. Each side plays very differently from one another. You're dropped into arena and try to kill one another, then you swap sides and try to do the same thing. I may not be a god among men in the MOBA genre, but I know the drill.

On the one side, you have the humans. Humans enjoy light, ranged weapons, fire, and not being eaten by vampires. You sprint about, tumble to dodge, and generally play with an eye toward most multiplayer shooter tropes. There are three classes, each of which has slightly different ranged weapons and abilities; I spent most of my time as an Alchemist, who fires little balls of exploding death at vampires whilst summoning walls of fire.

The other side is made up of vampires, who enjoy darkness, melee combat, and eating human beings. Vampires play significantly differently. Rather than performing a normal sprint, they climb up sheer walls, charge and pounce at their targets, and in one case pluck humans from the ground only to drop them later. By contrast, vampires attack only in melee range and as such are a bit more vulnerable to concentrated fire.

If you're thinking "this sounds like a vaguely fantastical version of Left 4 Dead," you're not entirely off-base. A concentrated effort by humans will fend off vampires efficiently, but individual vampires can dispatch an unaware human. It's a lot of dashing about, humans scanning rooftops while vampires leap around, generally ending when one side gets a decisive advantage and either mows down vampiric minions one by one or picks off lone humans. Or, as frequently happened to me, when one confused vampire leaps into a group of humans only to be gang-murdered within seconds, possibly accompanied by a setting-appropriate cry of "YOLO!" Did I mention I'm not very good at this?

While I'd like to comment on the appropriateness or lack thereof of these factions compared to the backstory of the game, I really can't. I can say that the humans feel a bit homogenous compared to the vampires -- two scruffy guys and a lady, all of them draped in earth tones and loose clothing. It's not horrible but not great either. The vampiric side has more distinct silhouettes, but the various skins still don't seem to differentiate you much.

One thing the game lacks but kind of needs is a tutorial of some sort, especially for the vampires. There's a lot of stuff that isn't immediately evident that governs large chunks of the vampire gameplay, and while you can learn by being thrown in and getting killed a few times, that doesn't lend itself to a positive impression.

After you do get the hang of it, though, is it any fun? Accounting for my own cynicism and my general disinterest in the genre, yes. There's some real fun to be had pouncing on hunters from a rooftop, or picking off a vampire trying to escape just before he scrambles over the corner of a parapet. Unfortunately, it's in a crowded arena of team-based class-based shooters, and the fact that the game plays solidly and enjoyably isn't enough by itself.

The other big draw is the game's free-to-play model, which takes equal pages from Team Fortress 2 and any number of other free-to-play games. Unlockable skins? Yes. Weapons and skills that allow you to customize your loadouts? Naturally. Just as naturally, you can buy those on the cheap with the knowledge that they're only yours for a limited time, or you can buy the far more expensive versions and unlock them permanently. There are also perks and such that come free on a daily basis or can be bought permanently. You get the idea.

Is it functional? Certainly. Straight power isn't sold; options are. At the same time, the net result is that when you first get in, you have no options whatsoever. There are no choices about how to play your class, so you have to get used to playing your chosen types without tricks, then eventually pick up tricks and get good with those. You can, of course, earn in-game gold to buy things just as easily.

In fact, if there's one word I'd use to describe the game, it's unfriendly. There's no tutorial, no initial options, nothing but just here is game you play now. That can create a poor first impression, especially in a beta.

That's a shame because this isn't a bad game in the least. If I were a core fan of the genre, I'd probably be able to see more of the fine details and where it's more or less balanced than others, but the game I played was fun enough. It just doesn't welcome you in, and you're supposed to find out a lot by just trying and failing.

Nosgoth might not be your cup of tea, and I certainly don't blame fans of the franchise who are upset at the idea that this is the closest they've gotten to a sequel. But it's fun, it's free-to-play, and if later beta stages add a little more guidance, it has some real potential.

Will it live up to that potential? That's a bit more ambiguous. The game lacks a strong hook, really; it's got a franchise layered on top of it that's known for providing something completely different. It's a solid game, but it's not very unique. That, in the end, may well be its downfall. In a crowded market, it has little to recommend it over its competitors except its setting, and whether or not it's making good use of that setting is a question for someone more versed in the lore than I am.

On the other hand, you do get to fire explosive bubbles into vampires. So that's something.

In this article: beta, beta-testing, betas, closed-beta, f2p, featured, first-impressions, free-to-play, mmofps, nosgoth, open-beta, opinion, preview, previews, psyonix, shooter, square, square-enix, team-based-shooter
All products recommended by Engadget are selected by our editorial team, independent of our parent company. Some of our stories include affiliate links. If you buy something through one of these links, we may earn an affiliate commission.