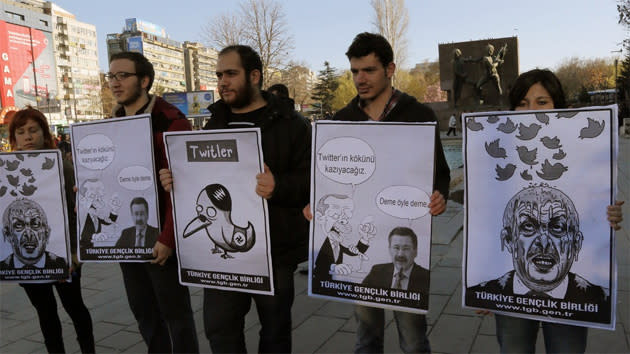 When Twitter went dark for users in Turkey earlier this week, it didn't take long for everyone to realize something was up. Prime Minister Erdoğan had reportedly threatened to pull the plug on the popular social network previously, before coming good on his word just hours later. The attempt to silence the platform, however, wasn't exactly well executed. People in the country were still able to send messages via SMS, and access was still available via the web by relatively simple means: using a VPN or by changing your PC's DNS settings. Today, it's reported that Erdoğan's attacks on the platform continue, with new reports suggesting that access to the DNS loophole being blocked.

The Turkish leader has also allegedly addressed the San Francisco firm directly, asking it to appoint a local representative, and to block specific content (that which it deems "prejudiced") at his government's request. Erdoğan has also said that other social networks such as Facebook and YouTube are at risk of being taken down too, in an effort to squash leaks and opinions he evidently thinks might harm his party in forthcoming local elections.

In this article: ban, dns, turkey, twitter
All products recommended by Engadget are selected by our editorial team, independent of our parent company. Some of our stories include affiliate links. If you buy something through one of these links, we may earn an affiliate commission.