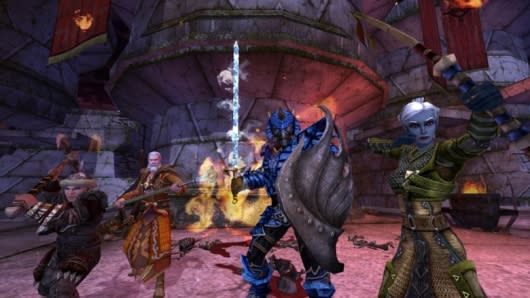 Turbine carted out Dungeons and Dragons Online's player council for a bit of sun today and made an attempt at more transparency by allowing the representatives to give testimonies as to what the experience is like.

"We have been asked feedback on things that are at a very early stage of creation (if not only on paper) and there's a real interaction between us and the designers/developers," council member Flavilandile wrote. "Yes, it doesn't means that in the end what we suggest will be implemented, but there's is a real interaction and I feel that they are listening to us when we voice our concern on a topic."

"I'm enjoying it, having fun. Though I'm hard pressed to say we're having the impact we might. The dialog I expected (perhaps unrealistically) is there, but it is more limited than I would have liked," council member IronClan added.

For the full range of testimonies, check out the post on the official site.

In this article: ddo, dnd, dungeons-and-dragons, dungeons-and-dragons-online, f2p, fantasy, free-to-play, interview, player-council, testimonies, testimony, turbine, turbine-entertainment
All products recommended by Engadget are selected by our editorial team, independent of our parent company. Some of our stories include affiliate links. If you buy something through one of these links, we may earn an affiliate commission.