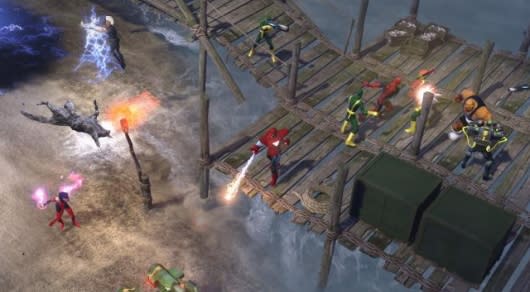 Seasons don't fear the reaper, nor does Iron Man or the Thing or Squirrel Girl. Phoenix is probably on a first-name basis with the reaper at this point. And Marvel Heroes doesn't want you to fear the reaper either, as the game is running a special event dubbed Don't Fear The Reaper. No, the event will not involve Romeo and Juliet being together in eternity, but it will instead feature increased rewards from a variety of challenges while also offering increased experience and item find rates.

X-Defense, Terminals, Midtown, and Holo-Sims will all feature enhanced rewards on a rotation schedule from now until April 1st. The bonus reward changes every few hours, giving you reason to change what you're doing, and the entire game will benefit from improved experience gain and item find rates while the event is running. Check out the announcement for the exact schedule of rewards so you can be ready to fly -- which might not be all that different from normal, come to think of it.
In this article: action, action-mmo, events, f2p, free-to-play, gazillion, gazillion-entertainment, in-game-event, marvel, marvel-heroes, marvel-universe, marvel-universe-online, muo, news, news-items, reward, reward-boost, secret-identity, special-event, superhero, superheroes
All products recommended by Engadget are selected by our editorial team, independent of our parent company. Some of our stories include affiliate links. If you buy something through one of these links, we may earn an affiliate commission.