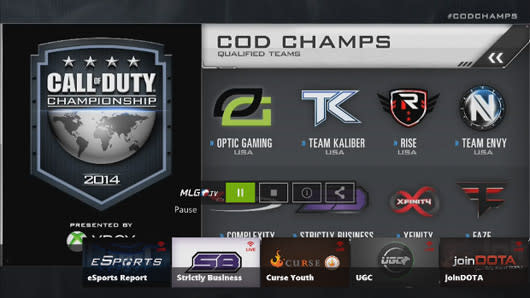 Microsoft has rolled out a slate of new entertainment apps on Xbox Live, giving Xbox 360 and Xbox One owners access to a broader variety of sports, competitive gaming, and film offerings.

Xbox 360 owners can access new film catalogs via the Encore Play and Movieplex Play apps starting this week, while MLB.TV Premium will deliver live games and league archives to subscribers on the Xbox One. Microsoft notes that its Encore Play, Movieplex Play, and EPIX apps are also scheduled to hit the Xbox One in the coming months.

[Image: Microsoft / MLG]
In this article: apps, encore-play, entertainment-apps, epix, microsoft, mlb, mlg, movieplex-play, xbox, xbox-one
All products recommended by Engadget are selected by our editorial team, independent of our parent company. Some of our stories include affiliate links. If you buy something through one of these links, we may earn an affiliate commission.