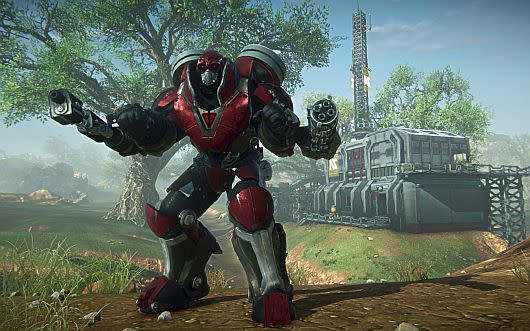 I'm sad to say that this is my final week in PlanetSide 2 for Choose My Adventure, but I did come away with some new thoughts on the game. Playing the Heavy Assault, Light Assault, and MAX opened up my eyes to the other side of the fence and showed me that these are more than just run-and-gun classes.

And with more information on the Valkyrie aircraft revealed over the weekend, we can certainly see that Sony Online Entertainment is still dedicated to supporting the game. This is a good thing considering so many MMOs with PS2's ambition often fall flat merely months after launch when the numbers inevitably drop. Not so for this one, it seems.

If you've been following along throughout my entire PS2 adventure, it might be no surprise to you that I really miss my Engineer. If I were to rank the PS2 classes in order, I'd probably have to go with Engineer first, then Infiltrator, Medic, Light Assault, Heavy Assault, and MAX. I'd even consider vehicle drivers as classes sometimes (especially aircraft pilots) because that's a whole different thing on its own, and they'd all rank right up there near the top. Aircraft might be a bit on the OP in this game, but it takes some real skill to maneuver them correctly. I'd be glad to hear your opinion regarding favorite classes in the comments.

While I love the game, it's certainly not perfect. In the grand scope of the game, you're taking over the same bases over and over again. That often makes it hard to explain to others who don't play. When my wife saw me playing, she asked me what the main goal is.

"You shoot the other team members until you take over their base," I said. "It's like capture the flag, but in a futuristic war scenario."

"So what do you get when you win?" I could tell this was going somewhere. It's a trap!

"How many points until you level?"

"Thousands. Especially in the higher levels." I squirmed uneasily, trying to remember whether I took out the trash or not.

"Wow, so you'll be shooting these guys and dying a lot." ProsConsFor my next adventure, the timing couldn't better as I'll be jumping into The Elder Scrolls Online for the first time ever. That's right, I ignored all the hyped beta weekends and especially ignored all the impressions articles about the game because I want to give it a shot on my own. At launch. When it's ready. I hope.

So join me next Wednesday on Choose My Adventure as we'll vote on how I'll play The Elder Scrolls Online throughout the month of April.

Shawn Schuster is now permanently at the helm of Massively's Choose My Adventure with you as the co-captain. It's going to be a rough ride, so put on your seat belt! Join him every Wednesday for a reader-guided deep-dive into a new MMO every month. Farcical puns about cars and farming sold separately.
In this article: choose-my-adventure, cma, featured, final, fps, hands-on, mmo-shooter, mmofps, opinion, planetside, planetside-2, poll, polls, ps2, readers-choice, sandbox, sci-fi, shooter, soe, sony, sony-online-entertainment, vote, voting
All products recommended by Engadget are selected by our editorial team, independent of our parent company. Some of our stories include affiliate links. If you buy something through one of these links, we may earn an affiliate commission.