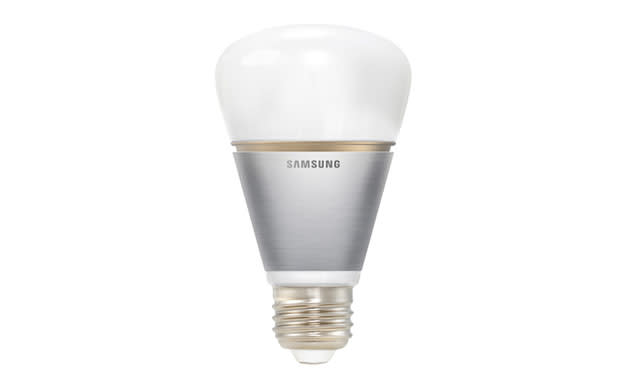 Though it got beat to the punch by arch-competitor LG, Samsung has just released its debut smart LED bulb, literally called the "Smart Bulb." It looks nothing like the multi-tiered model we saw at the FCC, but retains the Bluetooth-only spec -- unlike the WiFi-based Philips Hue and LG's WiFi/Bluetooth Smart Lamp. That'll give you direct control of up to 64 bulbs via a smartphone app, similar to how the Lumen bulb works. However, you'll need a ZigBee Bluetooth hub for home automation, and there's no word yet if that'll be included. The bulb will dim down to ten percent power with a color range between warm and cool white, meaning the disco-like tricks of the Philips and Lumen models are out. There's no word yet on the price, but Samsung said the Smart Bulb would last a prodigious 15,000 hours or around 10 years under normal usage. Given that, if it's in the same $32 range as LG's bulb, we think we can swing it.

In this article: bluetooth, LED, lightbulb, samsung, smartbulb
All products recommended by Engadget are selected by our editorial team, independent of our parent company. Some of our stories include affiliate links. If you buy something through one of these links, we may earn an affiliate commission.