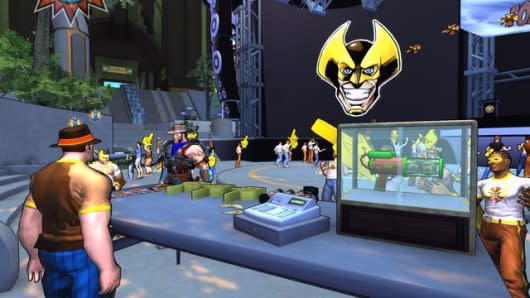 We're moving into the heart of convention season, when people move across the country to stand in lines and buy trinkets representing our favorite hobbies. So why not also pick up some trinkets in Champions Online to represent your character's favorite hobbies? It's time for FoxbatCon, the in-game event that celebrates the intensely campy 1960s television series focused around the roguish scamp known as Foxbat. After all, who wouldn't want to be surrounded by cosplayers inside of a superhero game?

The FoxbatCon event will run until April 11th, allowing players to pick up Foxbat Swag Bags from defeated villains full of convention-themed prizes. Players can also take part in missions (some of which will be introduced during the event) to earn Foxbat Creds, which can be redeemed for even more con swag. If you're eager to celebrate the camp value of an old (fictional) show, jump into the game now for the full experience.

[Thanks to matixzun for the tip!]
In this article: champions, champions-online, champs, co, cons, conventions, cryptic, cryptic-studios, culture, events, f2p, foxbatcon, free-to-play, humor, in-game-events, news, news-items, perfect-world, perfect-world-entertainment, pwe, superhero, superheroes
All products recommended by Engadget are selected by our editorial team, independent of our parent company. Some of our stories include affiliate links. If you buy something through one of these links, we may earn an affiliate commission.