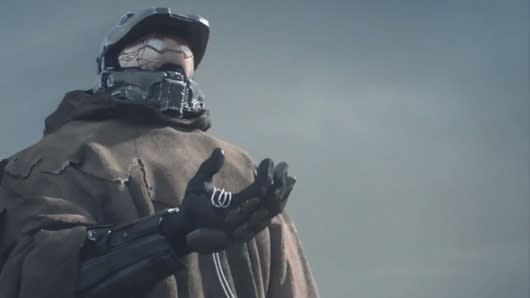 Microsoft's monolithic Halo franchise has yet to make it to movie theaters, but that hasn't stopped protagonist Master Chief from stomping onto other, shorter pieces of film. Microsoft and 343 Industries have vaguely announced a new Halo "digital feature project" to be released in 2014, and for all we know it could be a web-series, extravagant commercial, music video or a P90X video designed to wreak havoc on cybernetic glutes. It doesn't sound like a movie, however, and it will likely to be available online.

Dropping Ridley Scott's name certainly helps: Scott, last seen in cinemas with The Councelor and Prometheus and wait-don't-go Blade Runner, is the executive producer on this project, while Sergio Mimica-Gezzan directs. Mimica-Gezzan directed some episodes of Battlestar Galactica, not including (phew) "Scar" or "Black Market," as well as Heroes and Under the Hood.

Microsoft isn't confirming any more details regarding this Halo endeavor, but stresses that it won't hassle the "premium" Halo show underway at Xbox Entertainment Studios. The television series based on Halo is attached to Jurassic Park director Steven Spielberg.

The most recent bits of live-action Halo came in the form of "Scanned," a David Fincher-produced short promoting Halo 4 (seen above), and that game's preceding web-series, Forward Unto Dawn.
[Image: Microsoft Game Studios]
In this article: 343-industries, halo, halo-2014, microsoft, xbox, xbox-entertainment-studios, xbox-one
All products recommended by Engadget are selected by our editorial team, independent of our parent company. Some of our stories include affiliate links. If you buy something through one of these links, we may earn an affiliate commission.