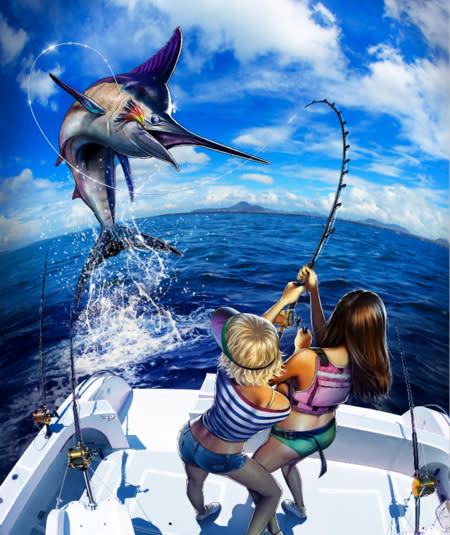 The topic of sexism in games is one that has raged for years and will continue to do so long after Ace Fishing has faded from existence, but for the moment it is the only game in recent memory that forced me to stop playing it because I felt too gross to continue.

Ace Fishing is, as the name would suggest, a fishing game, and as a fishing game it is extremely solid. The actual mechanics of casting your line, reeling in your catch, and ranking your fish based on rarity, length, and overall awesome factor are extremely satisfying. What isn't satisfying is the fact that, for at least the first hour of the game, you can't go five minutes without a chick with cut-off daisy dukes and a bare midriff telling you how good you're doing. On top of the scummy decision to dress the player's "guide" as a sex symbol, there's also a good bit of sexual innuendo tossed in for good measure. I don't need a questionably-dressed lady complimenting my "Yanking Skill" in what is supposed to be a game about catching fish. Even the loading screen features a pair of babes who apparently woke up and dressed as though they didn't realize they would be fishing that day.

I'm not sure who this kind of design choice is supposed to appeal to. I think even 17-year-old me would have seen through the thinly veiled attempt to titillate me when all I'm trying to do is play a decent fishing game. This isn't a game set in a fantasy universe where the lore offers a convenient, if shaky, justification for sexed-up characters; It's a fishing game. Give me a break.

After about an hour, I gave up on trying to break through the unneeded sexual appeal and deleted the app. It's a shame that this kind of crap has to ruin what would otherwise be a decent (if microtransaction-dependent) experience.

In this article: ace fishing, opinion, sexism
All products recommended by Engadget are selected by our editorial team, independent of our parent company. Some of our stories include affiliate links. If you buy something through one of these links, we may earn an affiliate commission.
Share
Tweet
Share