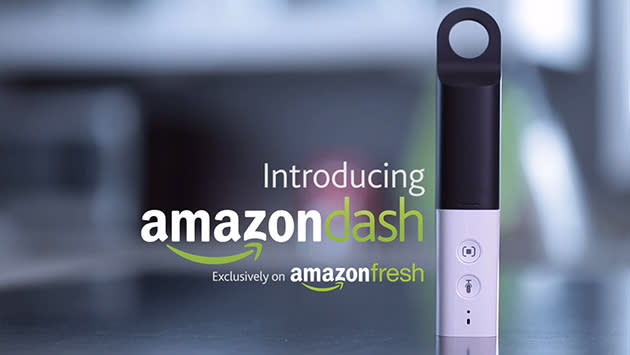 Let's be real: Amazon isn't going to stop until you can go your entire life without setting foot in an actual brick-and-mortar store. Now the company wants to make buying groceries and sundries from its AmazonFresh same-day delivery service even easier, and it's doing it with a tiny little gadget called the Dash. Yes, move over Fire TV -- Amazon's newest bit of hardware is a free (for now?), WiFi-capable barcode scanner.

Alright, maybe it's a bit more complex than that. It appears to be a pint-sized laser scanner LED scanner that'll capture the barcode of whatever items you need, but you can add to your list by speaking the name of the product into a built-in microphone. That voice-recognition bit seems like it would be better suited to generic products like apples, but the teaser video shows a young lady adding guitar strings to her cart -- presumably you can fine-tune choices like that once you jump onto the AmazonFresh site or mobile apps.

Word of the Dash definitely came as a surprise (especially on a lazy spring afternoon), but it falls right in line with Amazon's existing hardware plans. These days the e-commerce giant is all about pushing low-cost gadgets to reduce the friction of buying more stuff. Itching to read some Feynman? Fire up the ol' Kindle. Need to watch the last season of Luther? It's just a few clicks away on the Fire TV. What's really neat (if maybe a little scary) is that Amazon has finally found a way to make that formula work for real, physical products. Sadly, chances are you won't be using one of these things anytime soon. The AmazonFresh service is still only live in parts of California and Washington State, though rumors maintain that New York will get access to the program at some point.

Correction: We thought the Dash used a laser like most run-of-the-mill barcode scanners, but Amazon has confirmed that it actually uses an LED scanner instead. Sorry for the mix-up.

In this article: amazon, amazondash, amazonfresh, barcode, barcodescanner, dash, groceries
All products recommended by Engadget are selected by our editorial team, independent of our parent company. Some of our stories include affiliate links. If you buy something through one of these links, we may earn an affiliate commission.