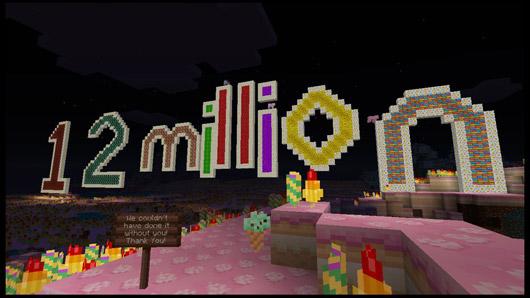 Mojang's sandbox build-'em-up Minecraft remains a popular favorite on the Xbox 360, surpassing 12 million units sold as of this month.

"It is pretty amazing!" Mojang's Daniel Kaplan stated in response to the latest sales milestone. "I remember when we started talking about sales numbers that we would be super happy to sell 1 million copies. That would have put us on par with [Battlefield 1943] and Castle Crashers, which both are awesome games, so that was something to aim for. We never even dreamed of selling 12 million!"

Minecraft previously topped 10 million sales in December last year. Mojang and development partner 4J Studios will continue to update Minecraft: Xbox 360 Edition with new content in the coming months, including a Candy Texture Pack due to launch on April 18.

[Image: Mojang]
In this article: 4j-studios, microsoft, Minecraft, mojang, sales, xbox, xbox-live-arcade
All products recommended by Engadget are selected by our editorial team, independent of our parent company. Some of our stories include affiliate links. If you buy something through one of these links, we may earn an affiliate commission.