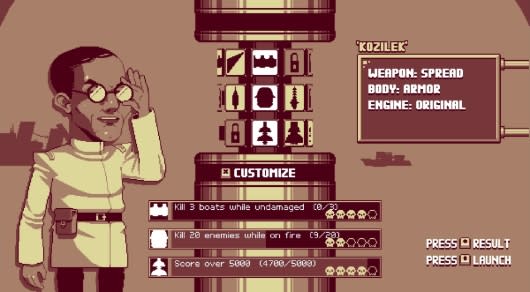 Luftrausers from Vlambeer is full of fiction. Its name is a made up word, and the game takes place in an alternate history, set some 10 to 15 years after World War II. The game's imagery, however, from its maniacal scientists and sharp-dressed military officers to its skull-emblazoned logo, are evocative of the very real Nazi party of the mid 1940s. This has made some players uncomfortable, which Vlambeer co-founder Rami Ismail addressed on the company's site earlier today.

Ismail noted that, while he believes that no interpretation of a game is "wrong," he and his fellow developers did not intentionally place players into the role of a Nazi pilot. Instead, Ismail said the game was inspired by the period between 1900 and 1980 where opposing governments were "capable of determining whether an opposing military force was working on secret weapons, but not quite what those weapons were."

The goal of Luftrausers, according to Ismail, was to have players take control of such a weapon. The only way for this to make narrative sense was to have players play the bad guys - someone we were spying on. "The player is part of an undefined enemy force that was not on 'our' side during the six or seven decades in which military intelligence was effectively telling us to prepare for a laser-equipped hoverboat assault," Ismail wrote.

Ismail made it clear he was explaining the game's aesthetics, but not excusing them. Ismail and studio partner Jan Willem Nijman are natives to the Netherlands, which was invaded by the Nazis in 1940. "We are extremely aware of the awful things that happened," Ismail wrote, "and we want to apologise to anybody who, through our game, is reminded of the cruelties that occurred during the war."
[Image: Vlambeer]
In this article: luftrausers, mac, nazi, pc, playstation, playstation-vita, ps3, rami-ismail, vita, vlambeer
All products recommended by Engadget are selected by our editorial team, independent of our parent company. Some of our stories include affiliate links. If you buy something through one of these links, we may earn an affiliate commission.