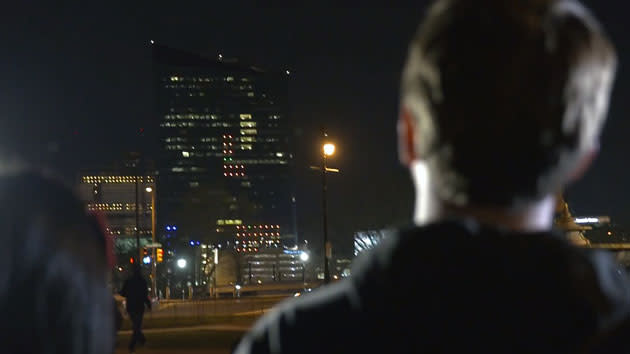 Tetris is turning 30 (yes, thirty!) in June, so some folks threw it one epic pre-birthday party at Philly Tech Week's kickoff event this April 5th. What'd they do, you ask? They used the 29-story Cira Centre building as a screen to play an enormous game of Tetris that could be seen in many parts of the city, as you can watch in the clip after the break. While this isn't the first time someone rigged the facade of a building to play Tetris -- there was that one time in France and another at MIT, which was actually a brilliant prank by its students -- this is possibly the largest attempt, thus far.

Among those who got the chance to mess up badly in front of a gaggle of screaming onlookers was Hank Rogers, Tetris company president a.k.a. the man you have to thank for the game. Dr. Frank Lee from Drexel University, whose hobby is to plan skyscraper-sized versions of popular games, also got his turn. As you might have guessed, Lee oversaw this stunt's construction, and he's hoping it nets his university another Guinness World Record -- he was also in charge of creating a giant game of pong using the same building in 2013, which holds the record for largest architectural video game display. Unfortunately, we can't describe in words how glorious playing Tetris on a massive scale is, so just watch it all go down below.

In this article: build, phillytechweek, tetris
All products recommended by Engadget are selected by our editorial team, independent of our parent company. Some of our stories include affiliate links. If you buy something through one of these links, we may earn an affiliate commission.