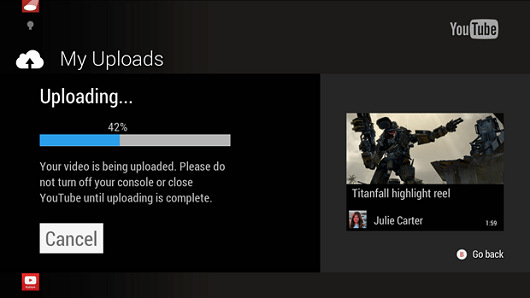 Microsoft is updating the YouTube app on Xbox One to allow players to upload gameplay clips directly to the video platform starting tomorrow. The app will integrate with the Game DVR and Upload services already present on the console; players will just need to enter the system's settings, select "Share game clips" and then "Share on social network" to access the YouTube upload option. Additionally, the updated app will allow users to view YouTube videos in snap mode, add them to Pins, add channels to OneGuide and earn media achievements on Xbox One.

Microsoft also announced the GoPro app for Xbox 360, which allows users to "stream and curate" videos created using the brand of high-definition personal cameras. GoPro app users will also be able to purchase cameras within the app through Microsoft's online store. The app will require an Xbox Live Gold subscription.

The Xbox One's trek into the livestreaming and video sharing realm was marked by the addition of Twitch broadcasting in March, which saw 108,000 broadcasters in the first week. While having the ability to upload content to YouTube directly will be ideal for many users, one hopes that the history of gameplay videos being flagged by the platform's Content ID Match system doesn't prove to be an issue.
[Image: Microsoft]
In this article: app, clips, gameplay, gopro, LiveStream, LiveStreaming, media, microsoft, sharing, upload, video, xbox, xbox-one, youtube
All products recommended by Engadget are selected by our editorial team, independent of our parent company. Some of our stories include affiliate links. If you buy something through one of these links, we may earn an affiliate commission.