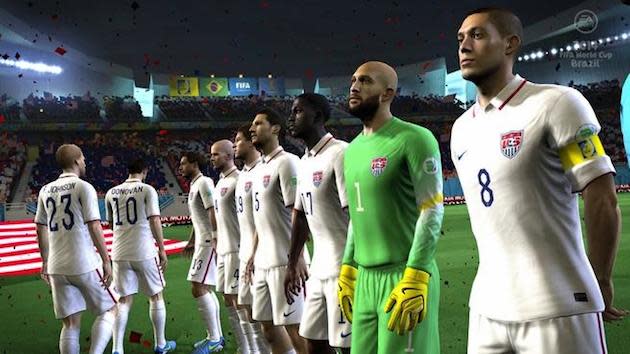 "We don't have limitless resources. We wanted to bring the game to as many people as possible and right now that was the 360 and PS3." That's what 2014 FIFA World Cup Brazil's lead producer Matt Prior had to say about the title not launching on Xbox One or PlayStation 4. Which is to say, EA's leaning on console-adoption numbers as the primary reason for the lack of a proper game on Microsoft's and Sony's newest consoles. Instead, EA Sports plans to bring some "engaging" World Cup-themed content to FIFA 14's Ultimate Team mode, in the hopes that'll be enough to satisfy disappointed Xbox One and PS4 owners.

If you look at the numbers, EA Sports' decision becomes clear. Currently, neither the Xbox One nor the PlayStation 4 has reached the 10 million mark in sales, and the two aren't available everywhere. Meanwhile, the Xbox 360 and PlayStation 3 can be found in many homes across the globe, including a large number of developing countries. "Emerging markets were important to making this decision," Prior told Engadget. "We wanted to create the best game we could that could reach as many people as possible." For those who own a last-generation system, this is great news, since the team behind 2014 FIFA World Cup Brazil was given the task of "setting a laser focus on building the highest-quality game" for these two consoles. And it shows. By placing all its eggs in one basket, EA Sports was able to create a game that's visually stunning, with fully rendered 3D crowds and a detailed presentation meant to evoke a real-life World Cup. "It's the most atmospheric game we've ever made," said Prior. Naturally, you can expect to see improved gameplay in comparison to FIFA 14 and many different game modes to choose from, both online and offline. This was also part of the reason the publisher made it a standalone title and not downloadable content, as was the case for the last country-focused game, UEFA Euro 2012. "We wanted it to be for people who haven't played FIFA before," Prior said. "The World Cup is such a massive event that it needed to have its own game and DLC wouldn't have allowed it to have all the features it does."

"We wanted to capture the fun, excitement and atmosphere to resemble the World Cup."

As part of its efforts to appeal to the masses, 2014 FIFA World Cup Brazil has a new Beginner Mode, which aims to make it easy for anyone to pick up a controller and face very little challenge from the AI. And then there are modes like Online World Cup, Road to Rio, Captain Your Country, Story of Qualifying and Scenarios, all of which you should be familiar with if you're an avid FIFA player. Yes, EA is hoping to "attract casual gamers" and to "reach the 50 percent who don't play FIFA," but that doesn't mean hardcore fans of the franchise won't enjoy it. It's still classic FIFA, with an added touch of Brazilian lifestyle transmitted into the game.

In this article: 2014WorldCup, Brazil, EA, EASports, ElectronicArts, Football, hdpostcross, interview, Soccer, Sports, WorldCup
All products recommended by Engadget are selected by our editorial team, independent of our parent company. Some of our stories include affiliate links. If you buy something through one of these links, we may earn an affiliate commission.