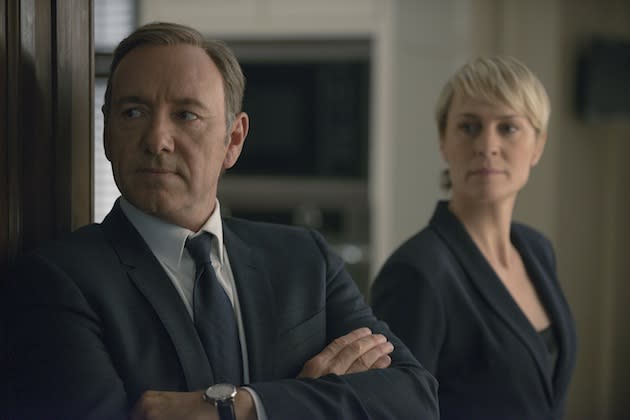 House of Cards may be most famous for leading the charge of Netflix's original streaming content, but the show's producer Media Rights Capital is ready for all avenues. Just like the first season, season two will get a release on physical discs this summer from Sony Pictures. Frank Underwood's Washington D.C. escapades are ready for viewing in 1080p, and although that's not 4K, at least your ISP's connection to Netflix can't get in the way. One change this year is that there are a few extras on the discs including a behind the scenes look at a table read and dive into Frank's tendency to directly address the viewer -- we'll have to wait and see if Netflix adds special features to the streaming editions before the next season arrives. There's no pricetag yet, but the first season started off at about $50 before settling in near $30, and we'd expect about the same for this one.

Blu-ray and DVD Bonus Featurettes:
· "Two Houses" – Exploring differences between the original show & the history of how this project came together.
· "Table Read" – A behind-the-scenes look at table reads cut together with the actual scenes from the show.
· "Direct Address" – Exploring the way Francis talks directly to viewers in both the original & new series
· "Politics for Politics Sake" – Politics is only the back drop in this show, but the themes are universal.
This featurette explores what the show is all about -- relationships and power, not just politics.
· "Line of Succession" – A look at the creative process that goes into making an episode. In this article: blu-ray, extra, hdpostcross, houseofcards, netflix, s2, SonyPictures, SonyPicturesHomeEntertainment
All products recommended by Engadget are selected by our editorial team, independent of our parent company. Some of our stories include affiliate links. If you buy something through one of these links, we may earn an affiliate commission.