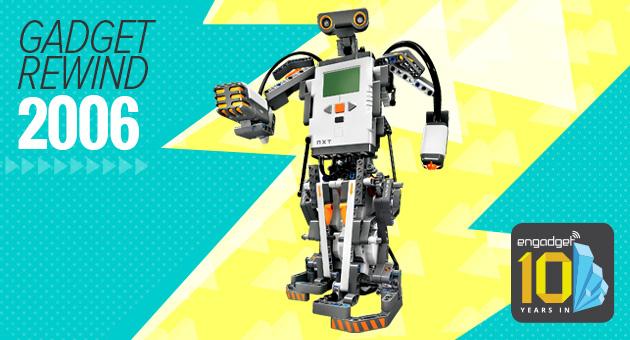 Lego, the popular toy brick maker, graduated from simple plastic playthings in 1998 when it released its Mindstorms Robotics Invention System (RIS). Born of a collaboration between Lego and the Massachusetts Institute of Technology (MIT), these "toys" let users build a variety of interactive humanoid, animal and vehicular robots. Although the product underwent iterative revisions over the years, it wasn't until 2006 that the company decided to introduce its true next generation of Mindstorms kits, appropriately dubbed NXT.

This updated series ditched the iconic brickwork-style that's made Lego famous, opting instead for more streamlined, though still interlocking, gray plastic pieces. It was also the first Mindstorms line to offer a Mac-compatible version of its icon-based building software alongside the existing Windows version; software which let users program specific movements and tasks by simply dragging and dropping predefined function blocks. The appeal of Lego's NXT series wasn't exclusive to just hobbyists, either. Researchers at Carnegie Mellon joined in on the fun and developed a new RobotC programming language that works well with the series.

Lego also gave its Mindstorms line a processing boost with the release of the NXT series. Compared to the original RIS' meager 8-bit "RCX" CPU, Lego's NXT was four times more powerful thanks to an upgraded 32-bit microprocessor. Fresh interactive components were added to the mix, too, including sensors for motion- and audio-based control.

In September 2013, Lego upped the ante for its smart-toy arsenal once again with the EV3 robotics platform. This new Mindstorms line, now backwards-compatible with the NXT series, touted several expected enhancements to its sensor load and processing might. Lego even set up a Mindstorms community for this launch where users could share their creations and collaborate with other builders. But the EV3 series' real standout feature wasn't its social angle; it was Lego's dedicated mobile apps. One of which, the aptly titled Robot Commander, turned iOS and Android devices into remote controls for Mindstorms projects.

Brick by brick, Lego's smart Mindstorms sets have evolved over the years to help transform a casual hobbyist pastime into an engaging crash course on robotics. A legacy that has left us with no shortage of amateur Wall-E's and Johnny 5's to pore over and adore.

Did you own a Lego Mindstorms NXT? Add it to your Engadget profile as a device you had (or still have) and join the discussion to reminisce or share photos of your device with other like-minded gadget fans.

In this article: 10 years in, 10yearsin, entertainment, gadget rewind, gadgetrewind, gear, lego, mindstorms ev3, mindstorms nxt, ris, robotics invention system, robots
All products recommended by Engadget are selected by our editorial team, independent of our parent company. Some of our stories include affiliate links. If you buy something through one of these links, we may earn an affiliate commission.