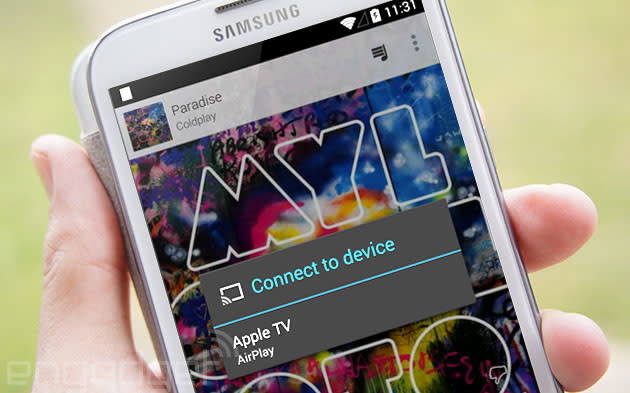 Google's mobile-streaming tech has a lot going for it, but listening to music stored in Mountain View's cloud is still limited to a handful of home devices. AirPlay-compatible gadgets, however, are a probably a bit more common than the Nexus Q, Chromecast and Sonos systems are, and developer doubleTwist's latest project acts as a bridge between the two ecosystems. The outfit recently released "AirPlay for Android," which is exactly what it sounds like: the tweak open's the search giant's media-streaming to AirPlay devices. The rub is that your device running Google's mobile OS has to be rooted for the hack to work. First, grab and install the aforementioned APK from the dev's blog, launch Google Play Music (GPM) and hit the Cast button. From there, you need to grant root access to the app, force-stop it and then relaunch. Voila! AirPlay devices on your wireless network should populate the list of compatible targets.

Because this (like so many of doubleTwist's other projects) is essentially a hack, the dev warns that you may have to force-close GPM now and again to sidestep Google's restrictive whitelist for approved devices. DoubleTwist doesn't say if AirPlay for Android will work for apps other than GPM, but given how Casting functions, we wouldn't rule the possibility out.

Correction: The doubleTwist blog says that applications using Android's Cast API automatically gain AirPlay support when the plugin is installed, so other Chromecast apps should work.

In this article: airplay, android, Chromecast, google, GooglePlayMusic, hack, mobilepostcross, streaming
All products recommended by Engadget are selected by our editorial team, independent of our parent company. Some of our stories include affiliate links. If you buy something through one of these links, we may earn an affiliate commission.