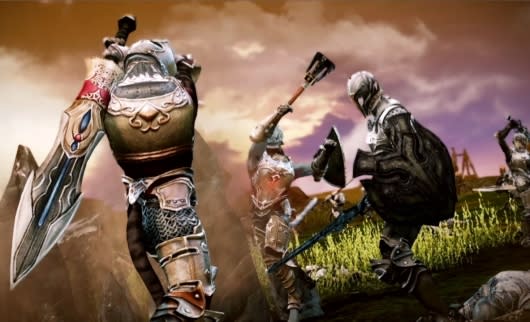 While Trion Worlds is still being coy about a release date for ArcheAge (the official line is still "2014"), the studio announced today during its livestream the details behind a trio of founder's packs for the upcoming fantasy sandbox. Here's what each of the packs contains:We spoke to Trion earlier this week about these founder's packs and upcoming closed beta test expected to begin in June -- read on!

We sat down with Trion Producer Victoria Voss to discuss the packs. Voss said that she is eager for fans to get into the alpha and beta testing programs. Out of all of the bonuses offered with the founder's packs, the glider was a favorite of hers, as it requires some measure of skill to fly correctly.

We asked Voss how the team would be handling the testing process, especially considering that Trion doesn't have the power to make changes to the game outside of localization issues. Currently the English localization is complete and the team is hard at work wrapping up the French and German versions. The latter two will be rolled into the beta test when finished.

Unlike some other MMO testing periods, ArcheAge's alpha and beta test won't be done sequentially; it will instead overlap. The alpha server will be an ongoing 24/7 test, while the beta server will be used for focused, limited-time events. Trion declined to comment on the expected or hoped-for size of the alpha and beta testing crowd, although Voss said that the team has discussed several scenarios.

Voss said that the team has scheduled some flexibility in case any issues crop up, but she was not too concerned as ArcheAge's rough spots have been smoothed out by its Korean run. The goal of the tests, she said, are mostly to iron out localization glitches, make sure the servers are handling the influx of players, and to identify any issues that need to be brought to XLGAMES for tweaking.

In this article: aa, alpha, alpha-test, arche-age, archeage, beta, beta-test, fantasy, founders-packs, pre-order, pre-purchase, pvp, sandbox, sandpark, trailer, trion, trion-worlds, video, xl-games, xlgames
All products recommended by Engadget are selected by our editorial team, independent of our parent company. Some of our stories include affiliate links. If you buy something through one of these links, we may earn an affiliate commission.