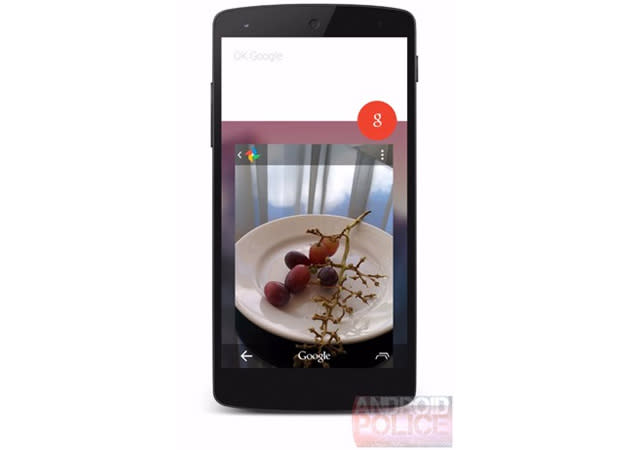 Outside of the Moto X, hands-free voice commands on Android are limited; pick up a Nexus 5 or Galaxy S5 and you'll find that "OK Google" only works at the home screen. If Android Police's sources are accurate, though, you'll soon get to bark out orders no matter where you are in the interface. Google is reportedly trying out an "OK Google everywhere" feature (mocked up here) that, much like the Moto X, is always listening and responds only to your voice. It might also pay attention to what you're running. If you're browsing snapshots, for example, you could tell your phone to "share this photo."

That may not be the only change in store. Experiments are reportedly underway with a new navigation bar that replaces the usual home button with a "Google" item. Hit that and you'd start a search without having to speak first. If you need to return to the main screen, you'd use the "recents" (read: multitasking) key. Suffice it to say that this would be a big break for Google, which hasn't changed its basic approach to navigation since Ice Cream Sandwich (Android 4.0) in 2011.

Don't count on either the voice or search features coming to a phone near you, however. While AP believes that at least some of these Android revisions will reach shipping software, they're not guaranteed to make the cut. Also, these may only show up in the official Google Now launcher -- third-party phones could mix things up. Still, we wouldn't rule out seeing any of these features on stage at the I/O conference this June.

In this article: android, google, mobilepostcross, okgoogleeverywhere, search, smartphone, VoiceControl, VoiceRecognition
All products recommended by Engadget are selected by our editorial team, independent of our parent company. Some of our stories include affiliate links. If you buy something through one of these links, we may earn an affiliate commission.