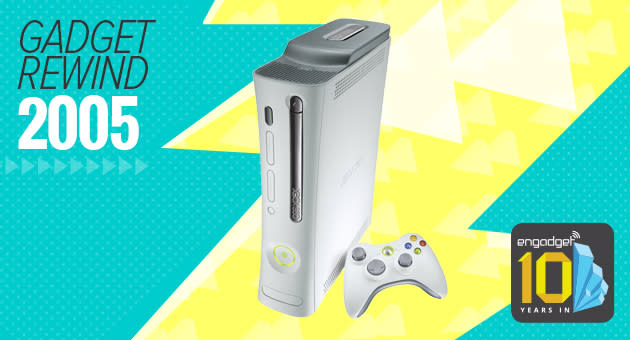 The current-gen console wars may be tilting in Sony's favor with its PlayStation 4, but once upon a very recent time (i.e., the previous console generation), Microsoft had a big early lead. When the company released its Xbox 360 back in 2005, the console had a considerable head start on the competition, beating Sony's PlayStation 3 launch by a full year. There were, however, intrinsic pitfalls in rushing the 360 out to market so fast; hardware problems Microsoft paid for dearly.

The Xbox 360's November 2005 launch was highly anticipated, with thousands of gamers (several Engadget editors among them) braving late hours and cold weather to snag one. Unfortunately for those eager gamers, Microsoft's haste to meet holiday deadlines resulted in limited stock levels, leaving many shoppers empty-handed and disappointed. On top of that, a significant portion of this initial run -- about 3 percent, according to Microsoft -- was afflicted with the "red ring of death," a dreaded, scarlet indicator that signaled a defunct, or "bricked" console. That production hiccup meant a good deal of early adopters had to spend those first days on the phone with customer support instead of playing their new 360s. Microsoft eventually responded to the crisis and made an effort to smooth out those issues with extended warranties, software updates and revised production runs.

Early hardware issues aside, the Xbox 360 was regarded by many as a beautiful thing, with a slimmer and more streamlined build than that of its hulking predecessor. Its gamepad even went on to become a high-water mark for controller design, setting a standard that's been emulated by many third-party companies since. And it's still the go-to for many PC gamers to this day. The 360's also credited with popularizing online multiplayer for console gaming with Xbox Live. That service, which debuted on the original Xbox, benefitted tremendously from Microsoft's earlier dalliance with online gaming and, of course, the 360's robust install base.

Limited onboard storage capacity, however, certainly discouraged wanton spending on digital games. The Premium Edition of the Xbox 360 came with a 20GB hard drive, making it the preferred option for most consumers. The cheaper Core version didn't have a hard drive at all, although for $100, gamers could purchase a 20GB add-on HDD. Without it, however, they couldn't download much content or play last-gen Xbox games. As the years went by, Microsoft released new 360 models with larger-capacity drives to accommodate the growing file size of games and gamers' appetite for downloads.

It didn't take long for Microsoft to garner gamers' loyalty with the Xbox 360. In its first three years on the market, the 360 effectively surpassed the original Xbox's lifetime sales with over 30 million units sold. That number then rose to 80 million units by 2008 and got another boost with the Kinect's release in 2010. Thanks to that monstrous install base, new games continue to arrive for the console to this day; games that are also seeing simultaneous release on next-gen consoles.

Microsoft may be passing the torch to its shiny and new Xbox One, but regardless, sales numbers for the 360 remain strong. In March of this year, over 100,000 units were sold. In fact, the Xbox 360's been handily beating Nintendo's struggling Wii U for 25 months straight. Not bad for a nearly 9-year-old console, eh?

Did you own an Xbox 360? Add it to your Engadget profile as a device you had (or still have) and join the discussion to reminisce or share photos of your device with other like-minded gadget fans.
In this article: 10 years in, 10yearsin, av, console gaming, gadget rewind, gadget rewind 2005, gadgetrewind, gaming, gear, microsoft, playstation 3, playstation 4, wii u, xbox, xbox 360, xbox one
All products recommended by Engadget are selected by our editorial team, independent of our parent company. Some of our stories include affiliate links. If you buy something through one of these links, we may earn an affiliate commission.