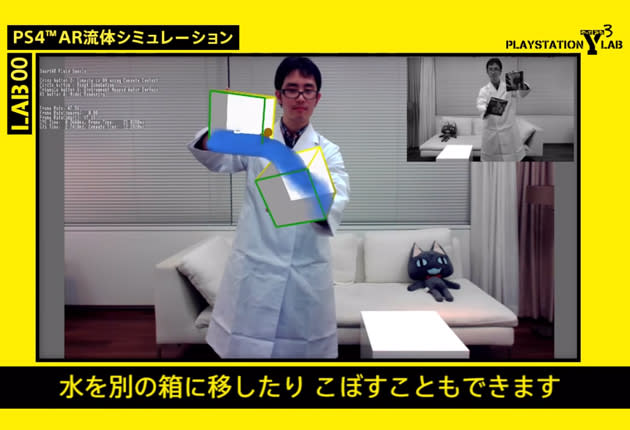 No, Sony's not coming out with a new augmented-reality toy just yet, but that doesn't mean it isn't working behind the scenes to make its graphics look a little more... believable. The company just posted two videos out of its PlayStation lab in Japan, both of which hint at what it could be like to play future PlayStation Move games. In the first, we see a man holding two three-dimensional boxes, one of them with water inside (Sony's signature rubber duckie is there too). As he pours the water back and forth from one box to the other, we see the water splash up onto the floor and sloshing back and forth, sometimes even covering the duck. Not "believable," you say? Check out the second video, which shows someone casting a flashlight on a dinosaur in a darkened room (just go with it, OK), with the shadows changing as the light moves on and off the subject. We've embedded both vids below, though you might still want to check out Sony's PlayStation blog post -- there's reference to some new trading-card recognition feature, though there's sadly no video demo to go with it.

In this article: AR, AugmentedReality, hdpostcross, playstation, sony, sonyplaystation, video
All products recommended by Engadget are selected by our editorial team, independent of our parent company. Some of our stories include affiliate links. If you buy something through one of these links, we may earn an affiliate commission.