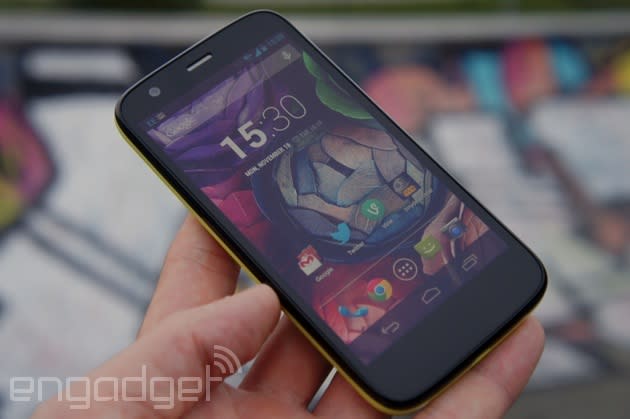 Motorola will soon fall into Lenovo's clutches, but it's still got some shiny new hardware to show off in the meantime. According to an invite that just hit our inboxes, the company's planning to show off a brand-new smartphone in London on May 13th. In fairness, the timing of the launch means that Motorola was almost certainly working on... whatever it is... while still part of Google, but this is Motorola's first big product launch since the news of its sale broke last January. And hey, if we're exceedingly lucky, we may just catch a glimpse of how things have changed (if at all) for Motorola now that it's preparing to report to some new corporate masters.

If the persistent hum of the rumor mill is worth anything, it seems like the wallet-friendly Moto E will wind up taking the stage. Firm details are still hard to come by (aren't they always?), but early reports claim that Motorola may have traded pure horsepower and battery life for a super-thin body. Here's the thing, though: Motorola has already proven that it knows how to make a cheap smartphone worth buying, and it's definitely running with a similar price formula again. Now the question is whether they can capture that low-cost lightning in a bottle yet again.

In this article: android, lenovo, london, mobilepostcross, motoe, motorola, smartphone
All products recommended by Engadget are selected by our editorial team, independent of our parent company. Some of our stories include affiliate links. If you buy something through one of these links, we may earn an affiliate commission.