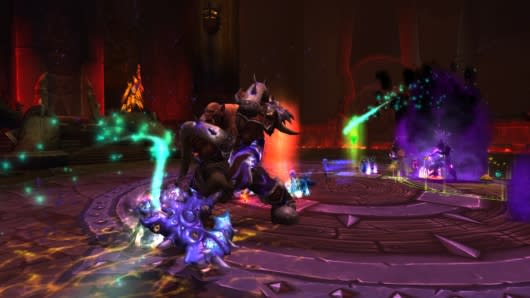 What does the future of raiding in World of Warcraft look like? It looks like Warlords of Draenor, obviously, but what does that entail? That's the focus of the final installment of a feature that's examined the past of raiding and now looks to the future. While the changes in raid sizes and raid modes have been known since the expansion was first announced, there are more alterations incoming that should shake up the way that players currently move through the game's raiding content.

The article explains that having a static group hitting the same content for quite some time stays engaging, while hitting a raid finder group is more or less the same each time. As a result, raid finder loots will be altered to lack set bonuses and have different art from the normal raids while also dropping more loot than other modes. Each raid difficulty will also have a separate lockout, while changes to Valor and the caps on same will diminish the importance of re-running old content that no one needs. Take a look at all of the changes in the new article.
In this article: activision, activision-blizzard, blizzard, blizzard-entertainment, endgame, endgame-model, expansion, expansions, fantasy, news, news-items, raid-difficulties, raiding, warcraft, warlords-of-draenor, wod, world-of-warcraft, wow
All products recommended by Engadget are selected by our editorial team, independent of our parent company. Some of our stories include affiliate links. If you buy something through one of these links, we may earn an affiliate commission.