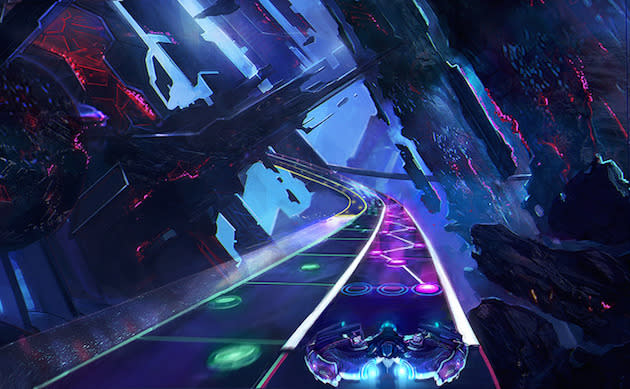 The team behind Rock Band and Dance Central wants to return to its roots, but needs your help to do so. That's right, Harmonix Music Systems is revisiting the PlayStation 2 cult classic Amplitude and have turned to Kickstarter to fund development. Harmonix says that while making Rock Band, the plan was to use the new beat-matching tools it developed for that game and apply them to a sequel to its classic rhythm title. That fell by the wayside, however, as publisher-funded games naturally took priority over a passion project. For the new version, Harmonix plans to apply the improvements afforded by the last 11 years (namely: widescreen HDTVs, more powerful consoles, the development team's talent) and marry them with the original's game-play. Because Sony still owns the property, the game's only been announced for PS3 and PS4 release, though. One aspect of the original that won't make the cut, however, is online play -- you'll have to make due with leaderboards and local multiplayer.

If that isn't too much of a deal-breaker, admission starts at $20 for a download code upon the game's release next March, or $40 for an advance copy next February. The backer rewards get crazier the higher the pledge amount. If you pledge $8,000 the team will come to your house and throw a party (seriously). Ten grand gets you airfare to Massachusetts, a night's hotel stay, a jam session with the Harmonix band, a studio tour and a helicopter tour of Boston. Neither of those have been claimed as of this writing, but the campaign still has a long ways to go in its 18 days. Amplitude has raised almost $80,000 in its first day, but that's a far cry from the $775,000 funding goal. With the amount of irons Harmonix has in the fire -- including Disney's Fantasia: Music Evolved and Chroma -- let's hope that if the game is fully funded that the team can make sure it comes out on time. After all, we've seen other gaming projects with lower monetary ambitions stumble along the way to release.

In this article: amplitude, gaming, Harmonix, hd, hdpostcross, kickstarter, ps3, ps4, Rhythm
All products recommended by Engadget are selected by our editorial team, independent of our parent company. Some of our stories include affiliate links. If you buy something through one of these links, we may earn an affiliate commission.