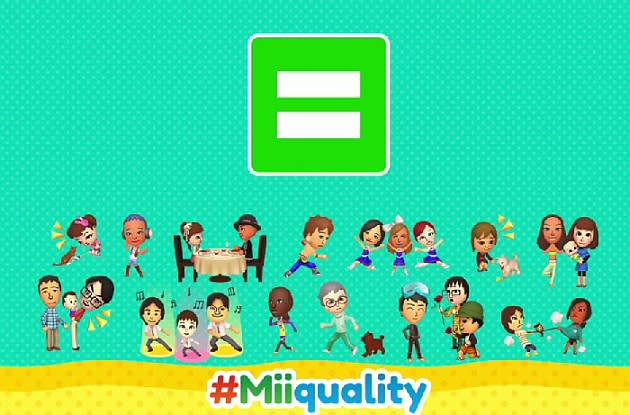 Nintendo has no problem with its Mii-based Tomodachi Life being off-kilter, but when it comes to the handheld game's same-sex avatars being able to wed, well, that's a different story. Tomodachi Life is all about the interactions and relationships between an island full of Miis, and as two characters' dating progresses they'll eventually walk down the aisle, unlock a bigger home and have children -- so long as one is, say, Mario and the other is Princess Peach. A fan called the gaming giant on this, urging the internet to use the "#Miiquality" hashtag across social media when requesting that the company change its stance. Nintendo's response? It told the Associated Press that it "never intended to make any form of social commentary" with the 3DS game's launch.

"The relationship options in the game represent a playful alternate world rather than a real-life simulation. We hope that all of our fans will see that 'Tomodachi Life' was intended to be a whimsical and quirky game, and that we were absolutely not trying to provide social commentary."

This isn't a new issue. After the game launched in Japan last year, there was a bug that allowed male Miis to marry one another and have children (but not two females). Nintendo addressed this by telling players to download a title update if they noticed "human relations that become strange." In regards to that, the outfit recently told the AP via email that "the ability for same-sex relationships to occur in the game was not part of the original game that launched in Japan, and that game is made up of the same code that was used to localize it for other regions outside of Japan."

Changing the game this close to release isn't feasible, but a patch could be issued after the game releases. To that, Nintendo told the AP that it's "carefully and thoughtfully" considered the responses it'd received via Twitter and the like, and it will continue considering the feedback. "We're using this as an opportunity to better understand our consumers and their expectations of us at all levels of the organization."

It's worth noting that gay marriage isn't legal in Japan, and this could be seen as a reflection of the country's values. In contrast, Western-developed games like the Dragon Age, Elder Scrolls, Fable, Mass Effect and The Sims series have taken steps to be more inclusive, allowing same-sex marriage and relationships.

In this article: 3ds, 3dsXl, BioWare, gaming, inclusion, lgbt, lgbtq sexuality, nintendo, tomodachi-life, tomodachilife
All products recommended by Engadget are selected by our editorial team, independent of our parent company. Some of our stories include affiliate links. If you buy something through one of these links, we may earn an affiliate commission.