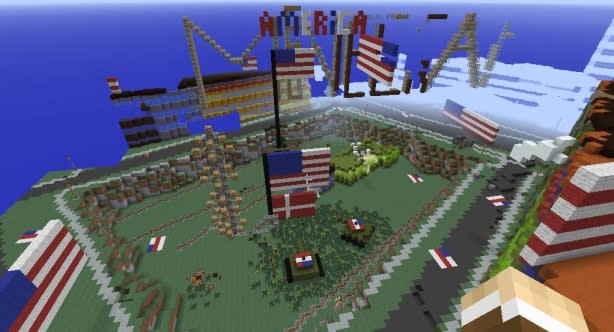 Let's face it: learning about your government and country is often not the most exciting thing in the world. That's why the Danish Geodata Agency recreated the entire country of Denmark in 1:1 scale inside of Minecraft - to make learning a bit more fun. Unfortunately, the Internet had its own agenda, and decided to teach those Danes a lesson about ... we don't even know. Why the world can't have nice things?

See, despite the DGA turning off dynamite on the map they created - which used more than 4 trillion blocks and 1 terabyte of data - intrepid Minecraft users discovered that in-game carts which carried dynamite were still active. Using this exploit, players bombed areas of virtual Denmark towns, sometimes placing American flags and tanks in their stead. Classy.

DGA spokesman Chris Hammeken told UK news site The Register that only minor areas were affected, and that the DGA does not plan to reboot the map. "We consider that as a nature of playing Minecraft – elements are broken down and new are being created," Hammeken said. "Therefore we will not reboot the demonstration of Denmark in Minecraft. But occasionally we will rebuild minor areas if buildings are removed and nothing new is being created."

If you want to check out what's become of virtual Denmark, the DGA still has it available to download.
[Image: Mojang]
In this article: danish-geodata-agency, denmark, Minecraft, mojang, pc, trolling
All products recommended by Engadget are selected by our editorial team, independent of our parent company. Some of our stories include affiliate links. If you buy something through one of these links, we may earn an affiliate commission.