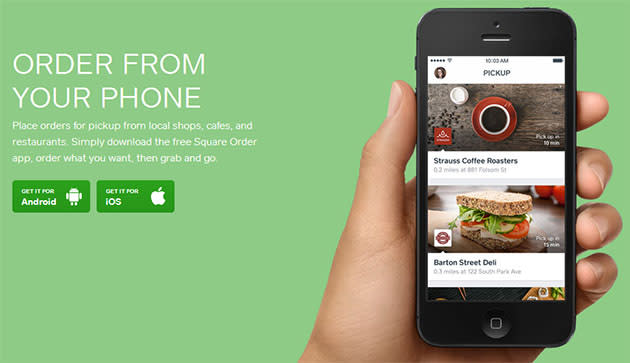 Square is one of those apps you may have heard of, but have no idea what it does -- because it mostly sells point-of-sale software and readers to businesses. It has just quietly expanded its consumer presence with Square Order, however, which looks like the customer-based app used in conjunction with Square Pickup for merchants. We says "looks like" because the app has quietly slipped into the iOS and Android (Beta) Play stores without any official announcement. Using it seems simple enough: you locate a restaurant, cafe or shop (Whole Foods, for instance) from a list of Square Pickup merchants. Then, you can place a pre-order, pay for it and receive a notification from the app when it's ready. That'll put it into competition with apps like PayPal's wallet and GrubHub, though so far Order is only available in New York and San Francisco (more cities are promised soon). We've reached out for more info, but if you're in one of those 'burgs, grab it here.

Update: We've just learned that Square Order is really a phasing out of Square Wallet. Head on over to this post to learn more about it.

In this article: Android, app, iOS, Order, payment, Pickup, Square, SquareOrder, takeout
All products recommended by Engadget are selected by our editorial team, independent of our parent company. Some of our stories include affiliate links. If you buy something through one of these links, we may earn an affiliate commission.