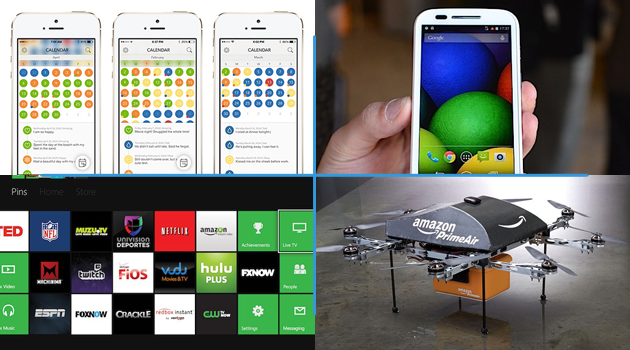 Netflix, Hulu, YouTube and other services will be open to all on Xbox One, Xbox 360

Today, Microsoft announced that Xbox One and Xbox 360 owners will no longer need a paid Xbox Live membership to access Netflix, Hulu and the like. So, say goodbye to that extra $5 per month it took to enjoy your existing subscriptions. If there's one thing Motorola knows how to do, it's how to get the best from mediocre components. The company's new Moto E is durable, water-resistant and has only slightly weaker specs than the Moto G. And the best part is that it costs just $129.

Hollywood, Amazon and your local realtor are fighting to legalize drones

Commercialized drones? Well, it's a complicated issue, mostly due to concerns of privacy and a sudden boom of low-flying objects. Despite the opposition, however, 68 groups are fighting to legalize the use of unmanned aircraft to shoot movies, dust crops and much, much more. The Boyfriend Log merges data obsession with your love life

Does your love life often present more questions than answers? If so, The Boyfriend Log is here to help. By frequently measuring your happiness, the app aims to provide some clarity in a sometimes utterly emotional fog.

In this article: amazon, drones, hulu, moto E, motoe, netflix, tdr, the boyfriend log, xbox
All products recommended by Engadget are selected by our editorial team, independent of our parent company. Some of our stories include affiliate links. If you buy something through one of these links, we may earn an affiliate commission.