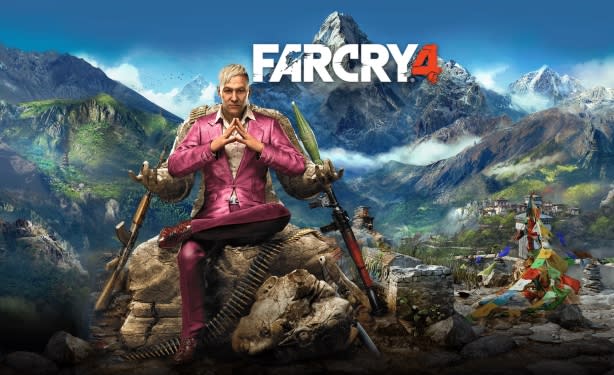 Far Cry 4 has been confirmed by a Ubisoft financial report for the fiscal year, and is expected to hit PS3, PS4, Xbox 360, Xbox One and PC on November 18, 2014. The game will take place in Kyrat, a fictional region of the Himalayas, which suffers under the reign of a self-appointed king.

"The year's performance will be led by five games," Ubisoft CEO Yves Guillemot said. "Assassin's Creed Unity, Far Cry 4, Just Dance, The Crew and Watch Dogs." Being this is an official report from the company, we can take this to be an official confirmation of the game, officially.

Still, it's not that big of a shock - back in February there was a mounting pile of evidence for the game's existence, and considering the 6 million units Far Cry 3 shipped and the 1 million sales of its spin-off, Far Cry 3: Blood Dragon, it's no wonder that Ubisoft would return to the brand.

Pre-orders for the game are now live, and those who throw their cash down early will receive an upgrade to the Limited Edition, which comes with three single-player missions centered around Hurk, a character from Far Cry 3. Players who pre-order will also receive Hurk's signature weapon, a harpoon gun called "The Impaler."
[Image: Ubisoft]
Show full PR text
UBISOFT® TAKES PLAYERS TO NEW HEIGHTS WITH FAR CRY® 4

Development on Far Cry 4 is being led by Ubisoft Montreal in collaboration with Red Storm Entertainment, a Ubisoft studio, Ubisoft Toronto, Ubisoft Shanghai, and Ubisoft Kiev.

In Far Cry 4, players find themselves in Kyrat, a breathtaking, perilous and wild region of the Himalayas struggling under the regime of a despotic self-appointed king. Using a vast array of weapons, vehicles and animals, players will write their own story across an exotic open-world landscape.

"Following the success of Far Cry 3, we wanted to take the franchise to the next level and create a game that will surprise players and exceed fans' expectations," said Dan Hay, Executive Producer. "Given the unique setting, we feel Far Cry 4 will stand out as a top first-person shooter and we're eager to reveal more about the game in the coming months."

Fans can tune into Ubisoft's Media Briefing at E3 for an exclusive first look at Far Cry 4.

More information about Far Cry 4 also can be found at: www.farcrygame.com.
In this article: far-cry, far-cry-4, ubisoft
All products recommended by Engadget are selected by our editorial team, independent of our parent company. Some of our stories include affiliate links. If you buy something through one of these links, we may earn an affiliate commission.