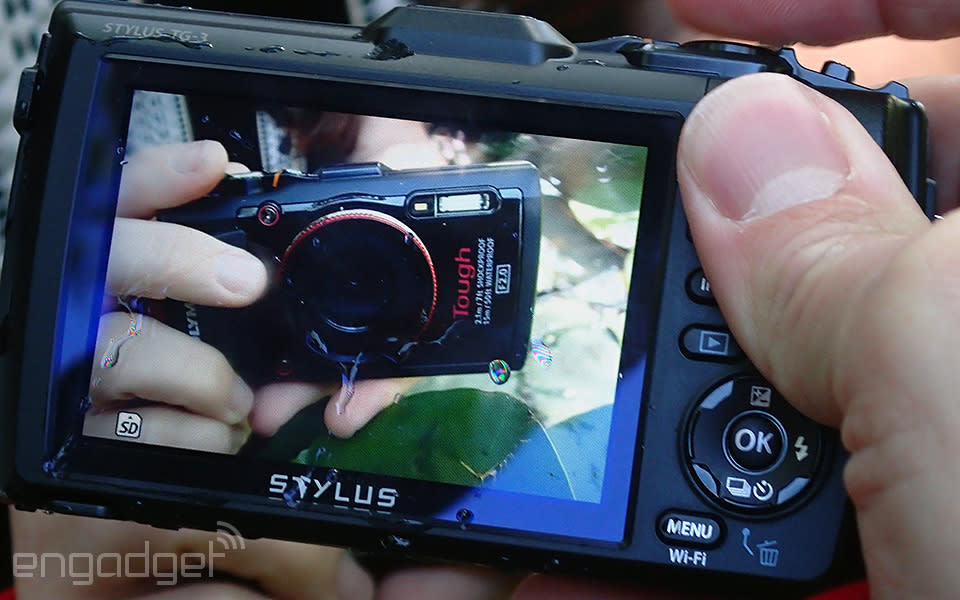 In the past, opting for a ruggedized camera has required some serious sacrifices. Whether that's meant comically large housings or mediocre performance, you couldn't get a fantastic point-and-shoot camera that you could also safely take on the slopes, the back of a motorcycle or on SCUBA dives. This year's Olympus Stylus Tough is the first such model I've seen that's worthy of your 350 bucks. A fast lens, speedy focusing and solid image quality make the TG-3 a great option even if you only plan to document your backyard rose garden or a child's first steps, but it'll also handle much more sophisticated shooting situations with ease. The TG-3 packs the standard suite of high-end point-and-shoot features, including a 16-megapixel BSI CMOS sensor, a fast 25-100mm, f/2-4.9 aperture 4x internal zoom lens, integrated WiFi and the same processor Olympus uses in its flagship OM-D E-M1 mirrorless camera. On the sensor front, it can calculate altitude or water depth and air or water pressure, all of which can be displayed on the camera. There's also integrated GPS, which can find your position in 10 seconds or less, attaching location info to individual images. My favorite feature, however, is the optional ($40) LED Light Guide, which redirects light from the camera to a ring around the lens, letting you capture macro shots like a pro. I spent several days shooting with the TG-3 at an Olympus event in New Orleans, taking the camera along on a fan boat tour of the Bayou, throughout the historic Oak Alley Plantation and even on a few trips down Bourbon Street. Granted, this isn't the most capable point-and-shoot on the market -- Sony's RX100 III probably holds that honor -- but the camera still handled these vastly different shooting environments like a champ. I found the focus speed to be fantastic, letting me capturing alligators, insects and fast-moving boats without missing the shot. The screen was bright enough to use for framing shots and verifying exposure and sharpness in direct sunlight, and the controls were responsive and easy to figure out.

The camera can pair with Olympus' Image Share app on an Android or iOS smartphone or tablet, and performance there is great as well. You scan a QR code on the camera's screen to get connected the first time, then going forward you simply launch WiFi mode on the TG-3 and open the Olympus app. From there you can fire off shots remotely and transfer images individually or in a group. The in-camera PhotoStory mode even lets you shoot Instagram-size (they're 1:1) split-photos, with three images in a single frame. I was able to upload to Instagram just seconds after capturing. Of course, battery life isn't going to match what you'll get with a mirrorless camera or DSLR, but I did manage to shoot more than 500 stills and three and a half minutes of 1080p video on a single charge. The camera charges over USB, but unfortunately it uses a proprietary cable, so you'll need to carry that accessory around with you on overnight trips. Overall, I was very pleased with the TG-3. I didn't have a chance to take it underwater or drop it from a height of seven feet (which it's said to survive unscathed), but I wouldn't hesitate to use this ruggedized point-and-shoot for everyday photography -- at $350, it's a very solid pick.

In this article: camera, cameras, olympus, point-and-shoot, rugged, ruggedized, tg-3, tough
All products recommended by Engadget are selected by our editorial team, independent of our parent company. Some of our stories include affiliate links. If you buy something through one of these links, we may earn an affiliate commission.